What is the story with the Olympics ticketing controversy? 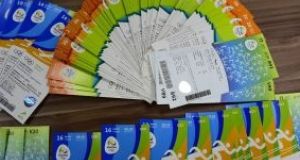 It all started when an Irish man called Kevin Mallon, who works for a UK sports hospitality company called THG Sports, was arrested as the Games began. He was found in possession of around 800 tickets for high-profile sporting events as well as the opening and closing ceremonies. Photograph: Tasso Marcelo/AFP/Getty Images.

Okay, I’m lost, tell me again what the story is with the Olympics ticketing controversy?

It all started when an Irish man called Kevin Mallon, who works for a UK sports hospitality company called THG Sports, was arrested as the Games began. He was found in possession of around 800 tickets for high-profile sporting events as well as the opening and closing ceremonies.

Why was that a cause for arrest?

He was accused by Brazilian police of selling the tickets at above face value. That is a crime punishable by up to two years in prison in Brazil although a custodial sentence is rarely imposed in such cases. At the time of the arrest Brazilian police noted that the then THG Sports chief executive James Sinton was arrested in Brazil in 2014 for organising a “ticket mafia” during the 2014 World Cup finals. He was reportedly fined and released.

What has any of this to do with the Olympic Council Of Ireland (OCI)?

All national Olympic Committees get an allocation of tickets to sell with hospitality through an authorised reseller. Mallon was arrested with some of these tickets.

What did the OCI say at the time of the arrests?

In a statement it said it had “no knowledge of the two individuals arrested. The OCI has launched an immediate investigation with our Authorised Ticket Reseller into how the these individuals were allegedly in possession of OCI allocated tickets. The OCI strictly adheres to the IOC regulations around ticket allocation, sale and re-sale. We are treating this matter with the utmost seriousness.”

And who are THG Sports?

THG is part of the Marcus Evans Group, whose owner Marcus Evans controls Ipswich Town football club. It was the Olympic Council of Ireland’s authorised ticket reseller (ATR)for the 2012 London Olympics and the 2014 Winter Games in Sochi but it no longer has that role, having being replaced by a company called Pro 10 Sports Management. Pro10 is now the only authorised seller contracted by the Olympic Council of Ireland to sell its ticket allocation for the Rio games.

So why did Kevin Mallon of THG have all those tickets then?

And he was in Rio doing all this ticket distribution for Pro10 for nothing?

So it would seem.

It is a Dublin-based agency which won the contract to be the ticketing agent for the OCI. It has said it had “always acted properly and fully in line with the ATR guidelines”. It said it had “suffered significant commercial loss as a result of the tickets being seized” by the Olympic authorities in Rio. And said the actions of the Brazilian police had left Irish and European customers “unable to buy tickets during games time through the authorised process”.

They are entirely separate to THG?

When the Irish Times rang Pro10’s Lucan office this week it was redirected to a voicemail where the message noted that the voicemail was full . It went on to say: “Thank you for calling Marcus Evans. Our office is now closed.” When contacted, a spokesman for Pro10 Sports Management said it too was “puzzled” as to how the reference to Marcus Evans appeared on a phone line which was supposed to have been run by it. He said the number in question had been shut down and expressed surprise it was now live again. He stressed that Pro10 was not affiliated to the Marcus Evans Group.

Okay, but Shane Ross is going to make everything better right?

Well that was his plan. On Sunday, a week into the story, the Minister for Sport flew to Rio for “crunch” or “crisis” talks with the Olympic Council of Ireland (OCI) president Pat Hickey. He wanted to get a number of things out of the meeting. Mainly he wanted the OCI to include an independent figure on its inquiry into Ireland’s Olympic ticketing controversy. And he wanted to get details about how the OCI had selected Pro10 as its authorised ticket agent and how it tracked its designated tickets. And what the nature of the contract signed was.

And did he get all that from Pat Hickey?

He got none of it. Pat Hickey and the OCI delegation refused to share any information received from the authorised ticket reseller (that’s Pro10, remember) on the grounds it might prejudice the case of Mr Mallon. His demand for one or two people from outside the organisation to join the inquiry was also rejected.

How did Shane Ross react?

Not well. He said he was “absolutely stunned” by the OCI’s “extraordinary decision” and said he had “just met a brick wall”.

So he let the matter rest there?

No, he did not. He said he did not think the OCI inquiry was credible “because they are a major player in this particular controversy. So I think it would have been far preferable and more sensible and it would have been a credible committee in which I could have had confidence if there was an independent to sit on it. Now I feel that the committee is flawed from the beginning.” He said he would consult with his Minister of State for Sport and the Attorney General about the Government’s next move in light of the OCI’s refusal. “We are certainly looking at the prospect of a different inquiry. That has not been ruled out,” he said.

Pat Hickey had a different view of the meeting?

He really did. He described the encounter as “excellent” and explained that the OCI had refused the Minister’s request as “under senior counsel advice we are carrying out our own investigation which has already started and we are not investigating ourselves, we are investigating the trail of the tickets and what has happened”.

And does Shane Ross have any leverage over the OCI?

Well, if you consider money a leverage then he has quite a bit. The Olympic Council of Ireland has been given €1.7 million in State funding over the past four years. It received €520,000 in 2015 alone and according to the latest published accounts, this accounted for almost a third of the organisation’s revenue for 2015.

Oh yes. On Monday police in Brazil said they wanted to arrest a second Irish man and three other people as part of their investigation into the alleged touting controversy. Arrest warrants for a David Patrick Gilmore, who they identified as Irish, and three other directors of THG Sports, including owner Marcus Evans were issued. Policed claimed the three men were all involved in the same alleged illegal ticketing operation that led to the arrest of Mr Mallon in Rio on August 5th. None of the men named at the press conference are believed to be in Brazil.

What did THG have to say about that?

It said it was “extremely concerned” by the charges brought against it and Mr Mallon which were “entirely without foundation”. Mr Mallon was holding tickets “ for collection by Pro 10 clients in Rio”. In a statement it went on to say its Brazilian lawyers had “advised us that there is no evidence to support these allegations, as indeed there is not, and we shall be vigorously defending all charges that have been brought,” it said.