Discussions under way for some time between administrators and prospective buyer 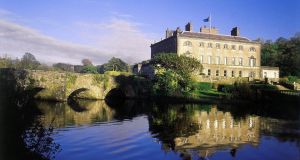 Discussions have been under way for some time between the Westport House estate’s administrators and a prospective buyer, which is believed to be a hotel chain prepared to invest €50million in the house and estate.

The future of Westport House in Co Mayo, which was put on the market a year ago, is expected to be announced imminently.

Discussions have been under way for some time between the estate’s administrators and a prospective buyer, which is believed to be a hotel chain prepared to invest €50million in the house and estate.

The investment will protect the existing 40 jobs at Westport House, and could offer up to 200 more, sources have indicated.

The future of the estate has been a cause of major concern locally, amid fears that it could be bought by a private owner who would want to keep it for personal use.

The estate has been open to the public for many years and is one of the town’s main tourist hubs on account of the variety of attractions which have been developed on it.

It is also a popular amenity area for local people.

About 350 people attended a protest meeting in the town last year to express their concerns about the future of the estate.

A spokesman for the administrators said they would not comment upon speculation.