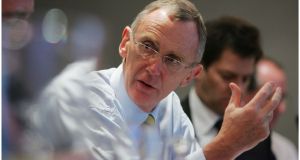 The lead investigator into allegations of criminal offences by former chairman of Anglo Irish Bank Sean FitzPatick has rejected suggestions that the bank’s auditors, Ernst & Young, were offered “vindication” if they helped the inquiry.

Legal advisor with the Office of the Director of Corporate Enforcemennt (ODCE), Kevin O’Connell, was giving evidence in the trial where Mr FitzPatrick is charged with hiding information from the bank’s auditors, now called EY.

Mr O’Connnell agreed that at the time the air was “thick with risk” for EY and that the firm is now being sued by the Irish Bank Resolution Corporation, into which Anglo has since been subsumed.

He agreed it would have suited EY for Mr FitzPatrick to be convicted of a criminal offence. He could see how this would be to EY’s strategic advantage.

He said that at the time there were too few staff in the ODCE trying to do too much with “too little real experience” and that was what led to the matters that were “legtimately being explored” by Mr Condon. He said he had stepped into a role for which he did not have training.

He accepted it would have been better if he, or members of the Garda, had taken statements from EY auditors Vincent Bergin and Kieran Kelly, rather than discussing their intended statements with them, EY solicitor Suzanne Tucker, or EY’s legal representatives, A&L Goodbody.

He said statements to the auditors that the ODCE would not be investigating the adequacy of the audits conducted by EY was not an offer of “vindication” in return for co-operation. “We were seeking the co-operation of people who did not have any obligation to co-operate with us.”

Mr FitzPatrick, of Whitshed Road, Greystones, Co Wicklow, has pleaded not guilty to 27 offences under the 1990 Companies Act.

These include 22 charges of making a misleading, false or deceptive statement to auditors and five charges of furnishing false information in the years 2002-2007.

The prosecution alleges the loans were “artificially reduced” for a period of two weeks around the bank’s financial year ends by loans from Irish Nationwide Building Society (INBS).

Mr O’Connell agreed with Mr Condon that he had more involvement with EY’s lawyers, A&L Goodbody, than with EY. “That is often the way of things when solicitors become involved,” he said. He accepted that in this case the level of involvement was “regrettable”.

The trial heard that former Anglo non-executive director, Lar Bradshaw, took out a loan in 2005 along with Mr FitzPatrick for an investment in Nigeria. The loan was almost fully backed by cash. For the 2007 year his director’s loan was given as €250,000, even though the loan was €24 million, but he thought this was because the loan was “netted off” with the cash by the bank staff.

When he rang Mr FitzPatrick in 2008 to ask about the Nigerian loan, and was told that that was one of the loans refinanced through INBS, he was “surprised.” Mr Bradshaw’s statement was read to the jury as he is recovering from a medical procedure.

Former non-executive director Gary McGann, who was on the Anglo board from 2004 to 2009, told prosecuting counsel John Byrne that he first learned of Mr FitzPatrick’s extensive loans from the bank in December 2008.

Mr O’Connell continues his evidence, before Judge John Aylmer and a jury, on Thursday.