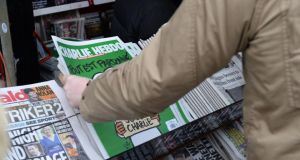 Many moderate Muslims see the support for Charlie Hebdo as “nothing more than the triumphalist hatred that the West has had for Islam almost since its beginning”, the Parnell Summer School was told yesterday.

Dr Neville Cox, a lecturer in law at Trinity College Dublin and an expert on blasphemy, said cartoons suggesting that Islam was inherently violent “stigmatise an entire community by reference to the non-representative, illegal actions of the few”.

There would be uproar if a cartoon suggested gay people wanted to be able to marry children because they were paedophiles or suggested African-Americans were cannibals.

Addressing delegates at Avondale House near Rathdrum, Co Wicklow, the family home of Charles Stewart Parnell, Dr Cox said the murders of 12 people at the Charlie Hebdo offices in January were “simply and self-evidently wrong”. It could not be said that the journalists who were killed brought it on themselves, he stressed.

However, Dr Cox argued there was no absolute right to free speech, noting the European Court of Human Rights stated that no such right existed.

Brian Trench, a lecturer in the school of communications in Dublin City University, said there had been “monstrous double standards” at play in the protests that followed the Charlie Hebdo attack in January.

He cited the presence of the Saudi ambassador in the solidarity march in Paris on January 11th as a case in point. The rally took place two days after a blogger was flogged in public in Saudi Arabia.

He said many leaders who participated in the “Je Suis Charlie Hebdo” marches had been responsible for restrictions of free speech in their own country, including Taoiseach Enda Kenny in relation to his refusal to reform the laws on blasphemy.

Mr Trench said the idea that Charlie Hebdo had brought the attack on itself was the same as suggesting that murdered Irish journalists Veronica Guerin and Martin O’Hagan had brought it on themselves.

Conference organiser Felix Larkin, a newspaper and cartoon historian, said he was “appalled at the very idea of any restrictions on freedom of expression”.

“We had a duty to publish the cartoon to offend those who had inspired the massacre. It was a missed opportunity to stand up and be counted,” he said. “By opposing freedom of expression, we are bending the knee to terrorism.”