Storm Lorenzo is headed towards Ireland. A status orange wind warning has been issued for six counties and a status yellow warning nationwide between Thursday evening and Friday morning when it is expected to make landfall. Video: Bryan O'Brien 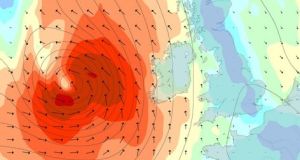 A graphic from weather mapping service Magic Seaweed showing the current expected location of high winds associated with Hurricane Lorenzo along the west coast of Ireland on Thursday morning. 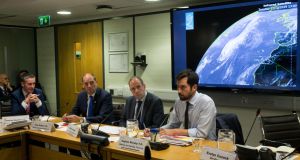 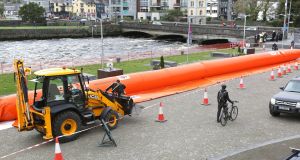 Galway City Council staff install a section of an aquadam near the Spanish Arch beside the River Corrib on Wednesday. Photograph: Joe O’Shaughnessy.

The remnant of the category 5 hurricane, which originated in the mid-Atlantic, has turned northeast and is heading for Ireland and Britain.

Met Éireann head of forecasting Evelyn Cusack said the western seaboard from Co Cork to Co Mayo will bear the brunt of the winds, which could reach storm force 11 in places.

She said the centre of the storm would be a deep depression which means that sea levels will rise. Coupled with high tide and violent winds, this is likely to lead to coastal flooding.

She said that Met Éireann may yet raise the threat level to red, the highest level, in some coastal areas. Red means there is a threat to life and people should not venture out.

The high winds will be accompanied by torrential rain and thunderstorms. Most places along the western seaboard will get about 50mm of rain, but mountainous areas in Galway, Mayo and Donegal will get up to 100mm of rain in just 18 hours.

An orange weather warning, the second highest, is in place for counties Cork, Kerry, Limerick, Clare, Galway and Mayo from 6pm on Thursday to 3am on Friday morning.

A yellow wind warning will be in place for the whole country from Thursday at 8am until Friday at 6am with mean wind speeds of 50km/h to 65km/h and gusts up to 100km/h resulting in some disruption.

Ms Cusack cautioned against complacency for those living in yellow warning areas. She said trees are still in bloom and heavy rainfall recently has weakened their roots. For that reason, the risk of falling trees is greater than a stronger storm in January might be.

“There will be level red impacts in some area and some inundations. There is an unusual coincidence of extremely low pressure, high tides and onshore storm force winds,” she said.

“We expect significant disruptive impacts. There could be trees down anywhere. Even in yellow areas, people must heed the advice of the local authorities,” she said.

This just happened in Kilmainham. It’s like a bomb hit it. Heard the bang from a café round the corner. Lucky nobody was passing it at the time. pic.twitter.com/Jm66vauPKy

Forecasters did not have a clear idea of the path of Lorenzo at the weekend, but the most recent models all show it right in the path of Ireland and gathering speed.

“We have a good degree of confidence in our model and we are running with that at the moment,” she said.

The expected rainfall could add to already saturated ground. Parts of the midlands and northwest received twice the average monthly rainfall in September, most of which fell in the second half of the month. Athenry had its wettest September in 13 years. On September 22nd almost 50mms of rain fell in Ballyhaise, Co Cavan.

The Road Safety Authority (RSA), has asked road users to exercise caution and to check local weather and traffic conditions and be aware of the conditions before setting out on a trip.

Schools in Galway, Mayo, Clare, Cork, Kerry and Limerick are being advised to “err on the side of caution” and close on Friday if they feel there is a risk to students from the impact of Storm Lorenzo.

Meanwhile, the National Parks & Wildlife Service has advised members of the public not to visit any national parks, national monuments or nature reserves whilst the status orange weather warning is in place.

Jim Casey from the Office of Public Works said there could be storm surges of up to a metre in the Shannon estuary area and between 0.6 and 0.8 metres elsewhere on the west coast.

These will be accompanied by “swell waves” and the greatest risks will be at 9pm when the high water mark occurs.

Minister for Local Government Eoghan Murphy urged the public to heed any weather warnings issued. He hoped that most people would be inside when the storm is expected to hit hardest on Thursday night.

Local authorities, which are the lead agencies for the response to severe weather, have activated their crisis management teams and local co-ordination groups in preparation for the arrival of the storm. The HSE and Irish Water have done likewise.

The NECG said the Department of Transport had activated crisis weather plans, with Transport Infrastructure Ireland crews “ready and on standby” to deal with any potential difficulties posed by the storm.

It also said the Department of Employment Affairs and Social Protection is on standby with community welfare officers ready to assist with damage and recovery due to the impacts of the storm.

Paddy Mahon, chief executive of Longford County Council and chair of the local authority body that sits on the NECG, said the counties affected are preparing sandbags for potential flooding.

The Irish Coast Guard has urged boatowners to ensure that their vessels are properly secured. They have also asked the public to stay away from coastal areas. “Our message is simple,” said Derek Flanagan of the Irish Coast Guard. “Stay back, stay high and stay dry”.

ESB Network’s Derek Hynes said it is anticipating that trees will fall and will bring power lines down with them given the level of ground saturation.

“We expect there will be power outages affecting the orange level counties and in some other areas. We urge people to have torches ready.”

He advised people to remember their meter point reference number (MPRN) and their eircodes for emergency crews.

HSE assistant national director for emergency management Tom McGuinness also urged the public to remember their eircodes. He said there will be a “full, continued service of all aspects and elements of the HSE and the National Ambulance Service”.