Yeats poetry to be displayed on London Underground 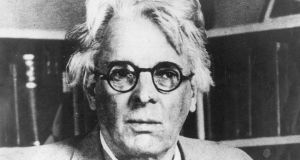 The “blue moon” year and the 150th anniversary of the birth of poet WB Yeats will be marked by 30 young harpists giving a free performance in south Galway on Thursday night.

The harpists from Athenry Music School will perform along with 15 students form Kiltartan national school. There will also be poetry readings by Pete Mullineaux and Gerry Conneely and music by violinist Clair Egan and accordionist Eoin O’Neill.

The event, which is part of the Yeats 2015 programme, takes place at Kiltartan church on the Lady Gregory Yeats Trail in south Galway.

Lady Gregory wrote several plays, including The Rising of the Moon and The Full Moon, while A Full Moon in March was the title of one of Yeats’s works.

The concert is part of the Harp Festival of Moons programme – a yearlong festival of live harp recitals that takes place on every full moon, with 2015 being a “blue moon year” comprising 13 full moons. It takes place in Kiltartan church, Co Galway, at 7pm and no booking is required.

The Yeats 2015 organisers have confirmed that they are also working with the Cúirt International Festival of Literarure, which takes place in Galway in April, and with Poems on the Underground in London.

A selection of Yeats’s poetry will be displayed on the London Underground during the months of March and April, June and July and October and November.

Poems on the Underground was set up by north American writer Judith Chernaik in 1986.