Water charge ‘would not have been a good fit’ for Revenue

Property tax compliance at 37% six weeks ahead of January deadline 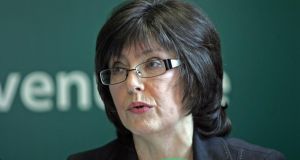 The outgoing head of the Revenue Commissioners, Josephine Feehily, said the water charge is more a utility than a tax

The outgoing head of the Revenue Commissioners has said the collection of the water charges would not have been “a good fit” for the body.

“It’s an entirely different model. It’s not a tax. It’s much more similar to the ESB and to gas [and] other utilities as people have been saying, so I don’t think it would have been a good fit for us,” the Revenue’s current chair Josephine Feehily has said.

“We have no competence in water at all. We’re good at collecting tax on a self-assessment basis and property tax in a way is a tax on wealth whereas water is a charge for a utility,” she added.

As regards the 2015 property tax, Ms Feehily said the compliance rate currently stood at 37 per cent six weeks ahead of the January 7th deadline with more than 700,000 households signed up for phased payments to date.

Ms Feehily said last year’s compliance rate stood at 94 per cent based on an estimated 1.95 million households, a rate she hoped would be higher next year.

In 2014, some 38,300 households had the property tax deducted from wages or pensions on a compulsory basis.

1 Aer Lingus staff say they are living in ‘near poverty’ and unable to cover rent
2 Focus on cross-border movement as Donegal prepares for Level 3 restrictions
3 Four stabbed in Paris attack near former Charlie Hebdo office, suspect arrested
4 Séamus Woulfe: The last man standing in Golfgate is set to learn his fate
5 Coronavirus: Warning of similar measures for other counties as Donegal moves to Level 3
Real news has value SUBSCRIBE