Washout: Dublin is having its wettest month in four years 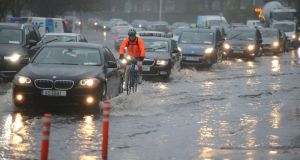 Dublin is having its wettest month for at least four years with rainfall amounts already almost double the average for November.

The change in fortunes - Dublin is usually protected somewhat by a “rain shadow” created by the Dublin and Wicklow mountains - has seen the Phoenix Park receive 147.6mm of rain in the last 27 days, compared to 87.5mms at Malin Head and 105.7 in Athenry.

Readings at Dublin’s other weather stations at Dublin Airport and Casement Aerdrome also show the highest levels of rainfall in at least four years.

The higher than average rain fall, which has led to flooded roads, blocked drains and overflowing streams this month is due to areas of low pressure passing over the southern part of the island.

Under typical conditions, the prevailing low pressures coming from the southwest would cover more of the island, with the Dublin and Wicklow mountains providing a “partial umbrella” for the capital, according to Met Éireann.

This is one of the reasons Dublin tends to have less annual rainfall than for example Manchester in the UK or Amsterdam in the Netherlands.

But this month the areas of low pressure have been only extended over the southern parts of the island and, because they are cyclonic, this causes the winds to come from the east into Dublin.

These winds come from the Irish Sea which at this time of the year is warmer than the land.

The good news is this weather system is set to end on Friday and be replaced by a period of very dry but also very cold weather across the country.

According to Met Éireann’s Joanna Donnelly “we may be sorry to see the rain go because it is going to be very cold”.

Friday night will see temperatures below freezing in the north and east of the country, while it will be less cold in the south and southwest.

Moderate easterly winds will freshen along western and southern coasts as outbreaks of rain push into the southwest towards dawn.

The weekend looks set to be dry and sunny for much of the country. Some rain will affect southern counties through Saturday.

Cold and crisp with highest temperatures of 4 to 7 degrees. Cold and frosty nights with temperatures near or below zero.