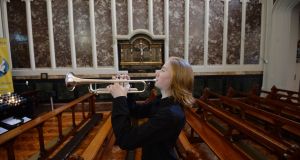 Churches throughout Ireland have memorials to young men who died in battle. Yet St Mary’s, Haddington Road, which hosted a Dublin Choral Foundation Remembrance Day concert on Friday night, is the only Catholic church in the capital with one dedicated to the memory of people who lost their lives in action during the Great War, as well as of a nurse who died some months after the war ended from an illness contracted while serving at the front.

The monument, a plinth in three sections, is unusual not only for the number of individuals – 93 soldiers and one woman – honoured upon it, but because it was erected, with the help of a committee, by the father of two of the dead. James Mahony was a grain merchant, originally from Limerick, who had moved to Dublin and prospered in business, settling on Raglan Road.

He was to have seven children, the eldest two of whom are commemorated on the plinth. His son Edmund was killed in action in France in 1918, while his daughter, Iza, was a nurse who had served in Malta during 1915, where she tended casualties from the Gallipoli landing.

Later, she was posted to France and was among the nursing staff dealing with the carnage at the Somme from July 1916 until the final stages of the battle, which ended 100 years ago this month. She was to die in April 1919 of complications from polyglandular pneumonia, in common with many wounded soldiers who had returned home, the illness having already established an insidious hold on her before she left France.

Lassus, Ireland’s newest fully professional chamber choir, under the direction of Dr Ite O’Donovan, returned to St Mary’s Church, where it gave its inaugural performance, on Friday night. The concert was to commemorate all those who died in the 1916 Easter Rising and also in the seven-month long Battle of the Somme.

The venue was chosen not only because of the war memorial but also because of its proximity to Mount Street Bridge, the scene of an unexpected exchange of fire between the Sherwood Foresters and the Irish Volunteers.

Several Dublin bystanders – including Felix Waters, a priest on his way to sympathise with fellow priests on the death of one of their curates, and a 13-year-old girl, Madge Veale, mistaken for a sniper as she watched from an upstairs window – were killed in crossfire, along with 31 of the British soldiers. The soldiers had understood they were on the way to France, but realised on landing that they had been redeployed to Dublin to deal with the Easter Rising.

By a cruel irony, Edmund Mahony had secured a commission with the Royal Munster Fusiliers in September 1914, at the outbreak of the war, and having been wounded several times, appeared set to defy fate, only to die near the very end of the war in the final Allied push against the Hindenburg Line. He is buried in France, though his name appears on the family gravestone in Glasnevin Cemetery, where his sister Iza is one of those buried.

The programme last night included readings from the work of Irish poets Francis Ledwidge and Tom Kettle, who died in the Great War, as well as from executed 1916 leaders Patrick Pearse and Joseph Mary Plunkett. Also featured were two songs, Thomas Ashe’s Let Me Carry Your Cross for Ireland, Lord and Joseph M Crofts’s long-forgotten Lament for PH Pearse.

The Dublin-born composer Charles Villiers Stanford who had been severely affected by the loss of his most gifted students at the front, was represented by two superb motets, Beati quorum via and Justorum animae.

Central to the occasion was a performance of the sonorous 16th-century, five-part Requiem Mass of the Dead by the Flemish composer Orlande de Lassus, who composed the piece in Munich in 1589, five years before his death. It is a remarkable work, which is rarely performed.

In honouring the war dead, trumpeter John Walsh sounded the Last Post, the eerie brilliance of which has been well established in Remembrance Day ceremonies in Europe as well as in North America, Australia and Canada.