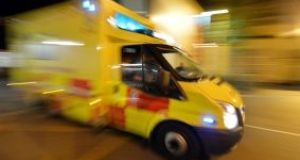 Management at Portiuncula hospital in Ballinasloe has also urged members of the public to use alternative health providers except in the case of “real emergencies”. Photograph: Alan Betson

Three hospitals in the south and west have urged the public to attend only in the case of genuine emergencies as they battle with overcrowding and an upsurge in cases of seasonal flu.

Visitor restrictions remain in place at the Mercy University Hospital in Cork as people continue to present at the hospital’s emergency department with influenza and other respiratory conditions.

The restrictions were introduced on New Year’s Eve in response to an increase in admissions through the hospital’s emergency department.

“As the high incidence of presentations at the emergency department continued overnight, hospital management again appealed to people with flu-like symptoms to telephone or visit their GP or South Doc in the first instance, rather than presenting at the hospital’s emergency department,” said a spokesman.”

The hospital has also appealed to members of the public to only visit the hospital if it is absolutely necessary, and not to visit if they have had flu-like symptoms in the previous four days in a bid to curb the spread of infection.

“In addition, there are 16 beds closed due to infection-control procedures to deal with the large number of patients with norovirus. We are working in close co-operation with our sister hospital, Mercy University Hospital, to manage the surge in demand,” hospital management said in a statement.

Management at Portiuncula hospital in Ballinasloe, Co Galway, where Minister for Communications Denis Naughten was taken for treatment on Monday after a road incident, also urged members of the public to use alternative health providers except in the case of “real emergencies”.

A hospital spokesman said there had been increased activity, particularly of “high dependency” cases, over the weekend at Portiuncula, and it urged people to contact their doctor or GP out-of-hours service.

Mr Naughten has been an advocate of retaining the full 24-hour emergency department at Portiuncula in spite of efforts to downgrade it.

Portiuncula was named as one of nine hospitals where emergency services should be reduced in a report by the Trauma Steering Group, which was leaked last July.

The leaked report received a sceptical response in the west given that both Taoiseach Enda Kenny and former minister for health Leo Varadkar have declared the emergency department at University Hospital Galway as “not fit for purpose”.

Mr Naughten said he believed the Trauma Steering Group’s draft report would be “seized with glee” by the Saolta group managing hospitals in the west.

Earlier last year a leaked Saolta report had also suggested Portiuncula’s 24-hour emergency department be downgraded to a “type B local unit”, similar to the arrangement which reduced services at Roscommon Hospital to daytime hours after the 2011 general election.

“Portiuncula is strategically very important, and there were never people on trolleys there until Roscommon’s 24-hour ED closed,” he said, commenting on the leaked Trauma Steering Group report.

“We have to take this report with a pinch of salt when remote diagnostics, such as stroke services, are not being used in spite of equipment for same in regional hospitals like Ballinasloe.”