Former recording studio was venue for artists such as U2, Van Morrison and Kate Bush

The musical history of the original location of Windmill Lane Studios in Dublin has been honoured with the unveiling of an installation featuring the sleeves of 21 of the most famous albums that were recorded there. Video: Bryan O’Brien 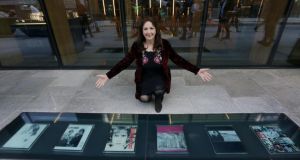 Moya Brennan pictured with six U2 album covers that are part of the new vinyl walkway on Windmill Lane in Dublin. Photograph: Laura Hutton/The Irish Times

A “vinyl walkway” of 21 of the most famous albums recorded at the Windmill Lane studio in Dublin, including U2’s first three albums, was unveiled at the site on Wednesday.

Musician Moya Brennan of Clannad was at the site to formally launch the two new installations, which celebrate the musical history of the original docklands location of the recording studios.

One installation is dedicated to the six U2 albums that include tracks recorded and mixed at the studios. The other displays the covers of 15 albums that were picked to reflect “the extraordinary breadth of acclaimed material created there over the studio’s 14 years at the location”.

The album covers are embedded beneath perspex glass and set into the footpath. They will be lit so they can be viewed at night.

To celebrate the unveiling, the first of a series of Windmill Live concerts arranged by Hot Press magazine takes place at the venue on Wednesday night, with Hothouse Flowers headlining.

They will be joined on stage by Grammy- and Emmy-award winning Moya Brennan for a free gig attended by 270 guests.

Soul singer-songwriter Erica Cody, one of the stars of the RTÉ Concert Orchestra’s The Story of Hip Hop, will provide support.

U2’s first three albums – Boy, October, and War – were recorded in full at Windmill Lane and the band also did much of the work on The Unforgettable Fire, The Joshua Tree and Achtung Baby in the original studio building.

The studios – regarded as central to the development of an internationally successful music culture in Ireland – were also the recording location for albums by Clannad, Van Morrison, The Waterboys and Kate Bush.

“It is appropriate that both they and all the musicians and artists who worked here will be permanently remembered through the artwork of their album covers in Windmill Lane,” he said.