Vincent Browne: Cosgrave was not a great taoiseach but he wasn’t the worst 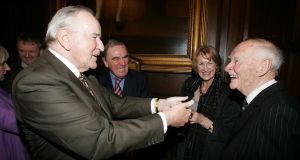 Former taoiseach Albert Reynolds meeting former taoiseach Liam Cosgrave after he spoke at the launch of a biography of John A Costello by David McCullagh in Dublin’s Mansion House in 2010. Photograph: Alan Betson

Liam Cosgrave was elected leader of Fine Gael in 1965 and, the following year, delivered his first address at the party ardfheis.

The social festivities of those occasions were held in Clery’s ballroom on Tuesday nights, not an exclusively Fine Gael event, merely an addition to the usual revelries.

As a member of Fine Gael at the time, I was there in 1966 and invited an attractive young woman to dance, a woman who was bewildered by the presence of so many auld fellas, a feature, apparently, unusual in Clery’s ballroom on Tuesday nights.

Her bemusement was deepened when a a trumpet announced the arrival of the party leader.“Jayney,” she said excitedly. “It’s Charlie Chaplin.”

I sought to avoid Liam Cosgrave’s presence, but then, surprisingly, he was at my side. “I assume this is the wife-to-be.”

My dance partner shrieked, “the cheek of you” and walked away, never to be seen again.

Cosgrave was an undistinguished leader of the opposition in the Dáil from 1965 to 1973. He has been credited with statesmanship in going privately to then taoiseach Jack Lynch about information concerning an attempted arms importation. That initiative caused Lynch to fire two of his ministers, Charles Haughey and Neil Blaney.

But Cosgrave went privately to Lynch only after his attempt to leak the story to the Sunday Independent had failed.

Discontent within the party with his leadership came to a head in December 1972 when he refused to accept the decision of his parliamentary party to oppose an amendment to the Offences Against the State Act, designed to permit evidence of senior gardaí’s opinion regarding membership of illegal organisations to be given in criminal trials.

The party’s then justice spokesman, Patrick Cooney, proposed an amendment refusing to give the Bill a second reading “because it contains matter which is unnecessary and excessive and which is repugnant to the basic principles of justice and liberty and the long-established fundamental rights of citizens”.

Three and a half months later, on March 14th, 1973, he became taoiseach of a Fine Gael-Labour coalition government.

He was a mild but successful chairman of that government of “the best of the brightest”, which turned out to be one of the most unpopular governments until recent times.

A “highlight” of his time as taoiseach was his decision to vote against his own government’s Bill to permit the sale of contraceptives to married couples, thereby, with the aid of a few other Fine Gael TDs, causing the Bill’s defeat.

Another “highlight” was his refusal to accept the resignation as defence minister of the Louth TD, Patrick Donegan, whose depiction of the then president Cearbhall Ó Dálaigh as a “thundering disgrace” for having the temerity to exercise his Constitutional discretion to refer a Bill, passed by the Oireachtas, to the Supreme Court to test its constitutionality.

He was the head of a government, which, along with the British government and the Northern Ireland parties, devised a powersharing arrangement, the Sunningdale Agreement, which was subverted within a few months of enactment by loyalists and republicans.

Of course, every government since then has ignored the report, including the present one.

The usual old fulsome over-the-top blather will dominate the commentary on Cosgrave over the coming days.

He was not a great taoiseach but he wasn’t the worst.