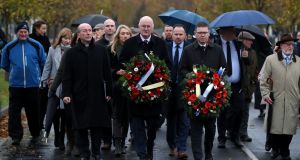 Ninety-nine years to the day after they were shot dead while attending a Gaelic football match, three victims of Bloody Sunday were honoured with headstones in Glasnevin Cemetery.

It was a raw and damp day in keeping with the solemnity of the occasion as Jerome O’Leary (10), the youngest to die, Patrick O’Dowd (57), the oldest, and Michael Feery (40) were all remembered.

After they were killed by British soldiers while attending the match between Tipperary and Dublin in Croke Park on November 21st, 1920, they were buried in unmarked graves like many of the poor and forgotten of that era.

Fourteen people were killed in a blizzard of bullets which lasted 90 seconds. By the end of that day, which followed the shooting dead of 13 British agents by a Michael Collins squad earlier that morning, 30 people had died in Dublin.

On Thursday there was a tangible sense of emotion more in keeping with a funeral than a commemoration as the last of the blue marble headstones were unveiled, all paid for by the GAA through its Bloody Sunday Graves Project.

Liam Dineen, the grand-nephew of Patrick O’Dowd, cried as he remembered his aunt who was left without a father as a consequence of Bloody Sunday.

“She often wondered what would be done to honour his memory. He was shot helping other people down over the back wall. One man he helped down felt this body falling on top of him. That was Patrick O’Dowd,” he said.

“I am very proud to recognise the significance of this moment. My aunt is long dead, but she will rest easy today knowing her father is now recognised.”

Jerome O’Leary had been lifted onto the wall at the back of the Canal End by another spectator so he would get a better view of the match. He was the second victim shot dead. O’Leary was the son of a British soldier, also called Jerome.

In June 1921, although his son had been killed by British forces, Jerome snr was shot by the IRA as a suspected spy. He survived, and fled to England with his family a short time later.

Despite repeated efforts no relative of Jerome O’Leary could be found. He is, however, the only one of the three children killed that day for whom a photograph still exists.

He is now part of the “Bloody Sunday family”, according to journalist and author Michael Foley, whose book The Bloodied Field has done much to humanise the forgotten 14. “Anybody who is ever 10 years of age and went to a match, imagine the excitement. Jerome would have had the same anticipation.”

The exact last resting place of Michael Feery is not known. He is buried along with 35,000 others in a mass common grave now covered with verdant grass in the St Paul’s cemetery extension of Glasnevin.

It is a cruel irony that Feery was shot dead by the same army he fought for in the first World War. Feery, from Gardiner Place, Dublin, survived the trenches having fought with the Royal Dublin Fusiliers and then the Royal Marines labour corps.

He never would have imagined dying in such ignominious circumstances from a thigh wound after he became impaled on a spike while trying to flee the shooting. He lay in a morgue unclaimed for five days, and was wearing at the time of his death his old army fatigues.

GAA president John Horan said Feery went to war “when it was not easily done, and fought against evil in World War One. He had courage and bravery. It is important to us as a community-based organisation to be with the families here today.”

The 100th anniversary of Bloody Sunday next year will be marked by a match between Tipperary and Dublin, which will be followed by an International Rules game between Australia and Ireland in Croke Park.