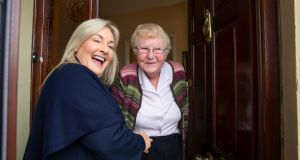 Ms Murphy has been largely silent in recent days after a number of interviews where she said Islamic State (Isis) is a big part of the immigrant population and that children as young as three may have been manipulated by the terror group.

She also said some asylum seekers may need to be “re-programmed” and that they carry angst.

Taoiseach Leo Varadkar has continued to back Ms Murphy despite multiple calls for her to be de-selected.

She visited a reception centre for asylum seekers on Monday and issued a statement after the visit apologising for her comments. She has now said that she told the asylum seekers about her comments and asked them for their forgiveness, which they accepted.

“I would like to say I deeply regret the words used in my interview. I have expressed and I wish to express again my understanding of the offence and hurt that I have caused by my comments and I wish to sincerely apologise,” she said in an interview with South East Radio on Thursday.

“It is a learning curve, I intend to be better informed in the future and I did visit with the Syrian families in the centre in Dungarvan. I told them exactly what I had said. I asked for their forgiveness by making an apology and that was accepted.

“I was hugely impressed after four and a half hours by these families and it is that knowledge that I will be imparting, an informed knowledge,” she said.

“I think my comments were a very poor choice of words. Again, I expressed an apology in that regard.”

She said she would continue her candidacy. “We have a huge campaign, a very positive campaign. We have huge teams out and we are getting a very positive response. The feedback is positive, people know me, they know how hard I work,” she said. “I have learned a huge amount.”

Ms Murphy was also criticised for comments on housing where she said addiction and bad personal choices led people to become homeless.

“I have been a soldier who has been homeless on a number of occasions in my life. My belief is that people with addictions need both housing and support services,” she told South East Radio.

“Verona Murphy made a mistake, I’m sure it won’t be her last mistake,” she added.

Speaking in Zagreb on Thursday, Mr Varadkar said there is no standard protocol for vetting candidates within Fine Gael.

“Obviously we’d have conversations with candidates about their willingness to sign up to the party’s policies and values. There’s no detailed standard protocol for vetting candidates but obviously we do our best to make sure that they are vetted,” he said.

Mr Varadkar said he had not been aware of the details of an employee relations dispute within the Irish Road Haulage Association, where Ms Murphy is president.

“I don’t know the detail. My understanding is that it’s a labour dispute within the Irish Road Haulage Association which has been resolved amicably.”

He said he could not say anything else on it without knowing the details.

Earlier this year, when the Maria Bailey controversy first came to light, Mr Varadkar said he would introduce a system whereby candidates would have to make know any legal cases in which they were involved.

Asked about its progress he said: “We haven’t actioned that yet, but that would have been in relation to cases going to the courts.

“This (the employee relations case) isn’t isn’t one that went to the courts.”

Mr Varadkar was speaking at the conclusion of the congress of the European People’s Party in Zagreb. The EPP is the representative group for centre-right parties in the EU. Mr Varadkar himself spoke on climate change during the conference.

“It hass been a very good EPP Congress, and we’ve successfully secured the election of Helen McEntee as new vice president winning the third seat,” he said.

He said he had also had the opportunity to have bilateral meetings with seven different prime ministers and presidents, as well as the EU’s chief Brexit negotiator Michel Barnier.