Workers’ Party hosts protest outside US embassy, Venezuelans rally opposite them

Supporters of the Venezuelan government and the country’s expatriates in Ireland confronted each other outside the American embassy in Dublin. Video: Ronan McGreevy 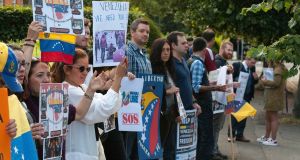 Venezuelan anti-socialist protesters face off against a pro-Venezuelan government demonstration outside the US embassy in Dublin on Thursday. Photograph: Dave Meehan/The Irish Times

Competing visions of Venezuela confronted each other outside the US embassy in Dublin on Thursday night.

The Workers’ Party organised a protest outside the embassy in Ballsbridge against what they believe is an American desire to overthrow democratically elected socialist president Nicolas Maduro.

Coincidentally, a group of Venezuelan expatriates had organised a protest against their government for nearby Herbert Park at the same time.

When they heard about the Workers’ Party demonstration, they decided to move theirs across the road to face them.

There was palpable anger and a sense of incredulity among the Venezuelans present that the demonstrators opposite them claimed to know more about what was happening in their country than they did.

Emotions were stoked when the group of about two dozen Venezuelan protesters sang the national anthem in unison.

“We are Venezuelans,” they chanted repeatedly, pointing in the direction of the motley collection of socialists on the other side of the street. The clear inference from their chant was that the people opposite were not Venezuelans.

“We support the people,” went another chant, and one of their number piped up, anger rising in his voice, claiming: “You support the killers, more than 2,000 people dead this year. You have no idea of what is happening in my country.”

His banner made clear his ideological opposition to the socialist government in Venezuela, previously led by the late Hugo Chávez. “Socialism never works. It just leads to tyranny.”

Chris Debrandere - who could be Irish with his reddish tinted hair and beard - has been living in Ireland for 10 years. “Things were already bad 10 years ago. It is a government that has done all the tricks in the book to stay in power.

“This is not about left or right. It is about a government that has no identity. They use their communist imagery, but it is just a corrupt government.”

Sophia Delgado, who has been living in Ireland for seven years, dismissed the pro-Maduro protesters. “Look at them. There is no Venezuelans over there.”

Her aunt was murdered in Venezuela by a gang two weeks ago, she said, part of the daily cycle of violence in her country. “I don’t want to be killed for having a phone in the street.”

She dismissed the government as no better than drug barons. “They’re narcos. The level of corruption in the country is so high.”

She invited the protesters on the other side of the road to debate the state of Venezuela at any time or place.

Those who think Venezuela is well run should go and live there for three months on the minimum wage before passing judgment, she added.

Across the street, Workers’ Party councillor Éilis Ryan said she had never visited Venezuela but would be happy to take up the invitation to spend three months there.

“If people had to go to every other country in the world to know what is going on, we’d live fairly sheltered lives. Reading stories produced by the richest people in the country is not a way to get insight into what is actually happening on the streets there.”

She was dismissive of the Venezuelan protesters on the other side of the street. “The reality is that the people over there represent the minority in their country. We are standing with the people in Venezuela who cannot afford to travel to Ireland, who can’t afford to get big high-paying jobs overseas.”

The Trump administration has announced sanctions against Venezuela following a referendum which created a new constitutional assembly giving greater power to the president.