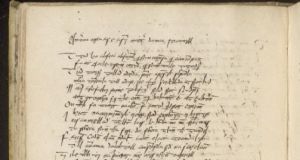 Part of a manuscript called Lebhar Inghine i Dhomhnaill (The Book of O’Donnell’s Daughter) about the daughter of Red Hugh O’Donnell, one of the earls who left Ireland after the Battle of Kinsale in 1602.

For centuries St Anthony’s College in Leuven, Belgium has preserved and promoted Irish culture in Europe.

The Irish College, as it is better known, was founded by the Franciscans in 1607 following the collapse of the old Gaelic order.

The Irish College instigated the historical chronicles which became the The Annals of the Four Masters, one of the earliest and most influential histories of Ireland.

The annals were created after Brother Mícheál Ó Cléirigh was sent from Leuven back to Ireland to collect manuscripts relating to Irish history and the lives of the saint.

Less well known is the role of the Franciscans in Leuven (the original French spelling is Louvain) in persuading the Vatican to recognise March 17th as the feast day of St Patrick.

This feat was achieved in the 17th century when the Vatican was reluctant to add to an already crowded ecclesiastical calendar.

“Saints lives make the identity of the nation,” said Hedwig Schwall, the director of the Leuven Centre for Irish Studies.

“We always say St Patrick’s Day was decided in Leuven because it was the Franciscan monks who went with this documentation to Rome and asked that March 17th be kept as St Patrick’s Day and Rome has accepted it.”

Thousands of pages of documents which were originally stored in Leuven have now been digitised and placed online.

They include copies of manuscripts painstakingly transcribed by Brother Ó Cléirigh for his project which would become the Annals of the Four Masters and based on books which were destroyed during the violent upheavals in Ireland during the 17th century.

There are also several books on martyrology and the lives of the saints from the medieval period. Twelve of the books are in old Irish and the 13th is in Latin. There are plans to translate them all into English.

Professor Ruairí Ó hUiginn, director of Celtic Studies at the Dublin Institute of Advanced Studies (DIAS) said the documents that have been digitised are critical to our understanding of ourselves as a country .

“As part of the counter-reformation, you had to prove you were a nation and you had a long history in Christendom. As a national document documenting our history from mythological times down to the 17th century, these are hugely significant. It showed that Ireland had a long and venerable history.”

There is also an manuscript called Lebhar Inghine i Dhomhnaill (The Book of O’Donnell’s Daughter) about the daughter of Red Hugh O’Donnell, one of the earls who left Ireland after the Battle of Kinsale in 1602.

The manuscripts were deposited at St Anthony’s College until the time of the French Revolution when they were deposited elsewhere because of fears that the anti-clerical fervour of the revolutionaries would spread across the border into what was then Austrian-held territory.

The digitisation was organized by the Leuven Centre for Irish Studies, and funded by the Irish Embassy in Belgium.

The manuscripts can be accessed at www.isos.dias.ie