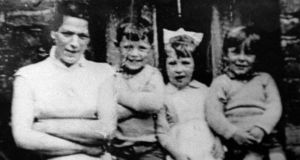 Jean McConville with three of her children shortly before she disappeared in 1972. Photograph: Pacemaker Belfast

There are voices and they talk about the death of Jean McConville. It may not matter. After two years of legal proceedings in the US, a set of audiotapes in a Boston College archive are supposed to answer questions about McConville’s 1972 murder by members of the IRA, who claim they suspected her of informing for the British army in Belfast.

The voices on the tapes are said to belong to former militants from the organisation that took McConville from her home, shot her dead and then buried her on a beach in the South.

But the prolonged court battle may produce evidence of questionable legal value, as Boston College now says it is unable to identify some of the interviewees.

Assuming no further legal wrangling in the US, police in Northern Ireland are set to receive subpoenaed material in which unidentifiable voices anonymously discuss a decades-old murder.

“It certainly greatly diminishes the value of the evidence,” says Eamonn Dornan, a lawyer who has participated in some of the American legal proceedings involving the subpoenas. “If they can’t be identified, they’re meaningless, or almost meaningless.”

The inability of Boston College archivists to identify some interviewees from the venture known as the Belfast Project grows from apparent failures in a system that was designed for the very purpose of masking the identity of research subjects.

In the archive, interview materials were marked only by a coded letter and court documents have used that coding to discuss which of the tapes Boston College is to provide to the Government.

Among the interviewees who discuss McConville’s death, which American courts have concluded from a review of the material, are those known as S, Y, and Z.

Nowhere, however, does Boston College have a key that connects those coded identities to the real identities of the interviewees.

Jeffrey Swope, a lawyer in Boston who represents the university in the proceedings over the subpoenas, acknowledged this week that the school’s archivists have never had that identification key.

In some instances, university archivists are able to identify Belfast Project interviewees by the research contracts they signed. For the subjects known as S, Y, and Z, however, Boston College acknowledges that it doesn’t have interview contracts, although it does have contracts that identify the subjects of four other sets of subpoenaed interviews.

The American university is blaming an Irish journalist for the missing documentation, saying that the writer and filmmaker Ed Moloney was obligated to provide the paperwork under the terms of his contract as the research director of the Belfast Project, which was concluded in 2006.

In response, Moloney said that the project ended in 2006, the subpoenas were served in 2011 and only now has Boston College realised that its archivists do not know what is in, or has gone missing from, the college’s own archive.

“Not once in all these years did the college ask me for the key to these interviews and that is because they knew that when I moved to New York at the outset of the project, for family reasons, I could not be involved in a process which stipulated that, for security reasons, contracts could only be taken by hand from Ireland to Boston,” says Moloney.

“This is an attempt to divert attention from the college’s own incompetence, one of many during this sad saga.”

Forced to turn over interviews with research subjects it can’t identify, Boston College is trying to find out whose tapes it has in its archives. The university has asked Moloney to provide them with the missing identification key. “Mr Moloney has refused to do so,” according to Swope.

Swope also provided a copy of Moloney’s contract with Boston College, noting that it required the research director to provide the identification key.

He did not respond to subsequent queries asking why Boston College was bringing the absence of that key to Moloney’s attention in 2013, seven years after the end of the project he ran.

Several Boston College officials, including archivist Robert O’Neill and spokesman Jack Dunn, also did not respond to phone calls and emails this week. Neither did officials at the US Department of Justice.

Dornan, who represents Moloney in litigation over the subpoenas, said this week that neither the US Department of Justice nor Boston College are likely to succeed in any effort to force a key to interviewee identities from the former Belfast Project director.

Moloney won’t co-operate and his long-expired agreement with the university is unenforceable due to the statute of limitations on contractual obligations.

As for American prosecutors, Dornan says, the law only permits them to subpoena “documents which are in existence”. And the identity key doesn’t exist. Other avenues may be available to the Government, including a subpoena forcing Moloney to testify in court, but “there are a lot of procedural difficulties” .

Those legal hurdles will be complicated, Dornan adds, by a new political climate in the US following two years of controversy over the subpoenas.

Whatever legal developments come next, they are unlikely to be resolved quickly. The death of Jean McConville is, 41 years after the event, a story that still resists its ending.

Chris Bray is a historian and journalist.