US politicians ‘not taking sides’ with Irish in Brexit - Pelosi 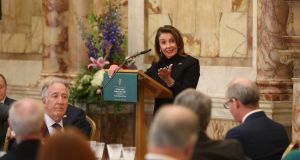 US politicians are not taking sides in protecting the Northern Ireland peace agreement against Brexit but “just holding to our values,” said House of Representatives speaker Nancy Pelosi.

The Democratic leader said at an event in Dublin that a future US-UK trade agreement was “just not in the cards” if there was any damage from Brexit to the 1998 Belfast Agreement underpinning the peace process.

Speaking at the first official engagement of the visit of a US congressional delegation, Ms Pelosi told Tánaiste Simon Coveney and other politicians and guests gathered at the Department of Foreign Affairs that Brexiteers should not think of a trade deal with the US as “any kind of consolation or comfort to them.”

She said the congressional delegation made it clear during their meetings and conversations with UK prime minister Theresa May and other Conservative politicians in London ahead of their arrival in Dublin on Tuesday morning that the UK’s departure from the EU could not come at the expense of the 21-year-old deal.

“This isn’t for us an issue or an agreement; it is a value,” she said of the peace agreement, saying that it was “something so elevated because of the number of hundreds of years of conflict that it resolved.”

The US respected the democratic wishes of the British people to leave the 28-member political and economic bloc but cautioned UK politicians against weakening the peace agreement in the process.

She said that the delegation told UK politicians that “as they work it out, not to think for one minute that there’s any comfort for them in the fact that if they leave the EU, they would quickly have a US-UK trade agreement.”

“That is just not in the cards if there is any harm done to the Good Friday accords,” said the woman who is second in line to the US presidency after the vice president.

Ms Pelosi said that it was “hard to get any trade agreement” passed in the US congress but that a trade agreement that does damage to the Northern Irish peace agreement “just can’t possibly happen.”

“Don’t even think about it,” she said, to applause from guests at Iveagh House that included Ministers of State Helen McEntee and Ciarán Cannon, the Irish ambassador to the US Dan Mulhall along with diplomatic members of the Government’s Brexit team.

The California congresswoman, the highest-ranking elected woman in US politics, praised the peace deal as a “model for the rest of the world” and warned that another agreement could not come along at its expense.

Democratic congressman Richard Neal, the chairman of the powerful US House ways and means committee that must sign off on any future US trade agreement, recalled how when he travelled into Derry 25 years ago there were 30,000 British soldiers in the geographic area the size of state of Connecticut.

“Today, the phone pings. That is an extraordinary achievement the men and women who have lived on this island accomplished,” said the Massachusetts congressman whose grandparents emigrated from Ireland.

Any retreat from “the firmness” with which the peace process was embraced “would be an awful mistake” and the US politicians were determined “to ensure no return to any border,” he added.

The US delegation will meet Taoiseach Leo Varadkar later on Tuesday at Government Buildings. Ms Pelosi will address the Oireachtas on Wednesday as part of the Dáil centenary celebrations.

Introducing Ms Pelosi, Mr Coveney touched on the role of one of her predecessors as US House speaker, Tip O’Neill, in helping to support development and peace by establishing the International Fund for Ireland.

“The peace process and its success is your investment and your achievement, as it is ours,” Mr Coveney told the visiting US delegation that includes eight members of the US congress.

The Tánaiste said the Government did not want to put obstacles in the way of the UK finding agreement on a divorce deal to leave the EU but that it had to protect Irish interests.

“We have no desire to make life difficult for the United Kingdom. They are our closest neighbours and in many ways our closest friends,” he said.

The extension of the “article 50” exit process to October 31st would allow time for the UK government and parliament “to work out precisely what they want by way of future ties with the European Union. ”

The Government was determined to “stay true to hard-won principles and balanced accommodations enshrined in the Good Friday Agreement,” said the Tánaiste.

“We are resolved that a hard border which we all worked so patiently to remove will never be reinstated,” he said, before referring to the importance of the “backstop” insurance policy in the proposed divorce deal to ensure no return of a hard border.

“We need to ensure that our troubled and at times tragic past will not come back to haunt us,” he said.

“The stakes are that high.”

Irish, German and Italian contact-tracing apps to be linked in bid for ‘safer’ travel 14:54
Attacks against women rise during lockdown as other crimes plummet 14:32
Taoiseach ‘not at all happy’ ex-minister took job in sector he was responsible for 14:31
Sipo legislation to be reviewed following Michael D’Arcy case, Taoiseach tells Dáil 14:08
Demolition of historic home of The O’Rahilly in Dublin begins 14:00