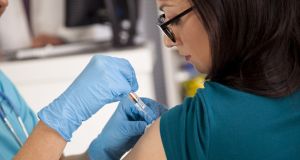 Patients in England are being asked from today to take part in a world-first trial for a universal flu vaccine that offers hopes of a lifetime freedom from the winter bug.

Currently, vaccines are changed each year in a bid to inoculate people against the strains of virus which are most likely to cause illness in the upcoming flu season, but a poorly-matched vaccine can often fail to protect.

Now researchers from the University of Oxford are drafting in the help of 10,000 people aged over 65 across Oxfordshire and Berkshire to see if the new jab can work regardless of the strain of flu in circulation.

It is the world’s first widespread human testing of such a vaccine, according to the National Institute for Health Research, which is supporting the project.

Most current vaccines are only effective in 30 to 40 per cent of over-65s and researchers believe the new vaccine could increase this.

But last year’s flu jab in the UK was not “significantly effective in protecting against influenza for the over-65 population”, according to Public Health England since it worked for just 40.6 per cent of 18-64 year olds, but showed no significant effectiveness in the elderly.

The English tests come as the Health Service Executive in Ireland urges nurses, doctors and other hospital staff to get the vaccine, in a bid to cut down the numbers getting flu in the months ahead.

Last year the rate of uptake was 32 per cent - the aim is to get it a level of at least 40 per cent. Health care workers are ten times more likely to get the flu, according to Dr Anna Clarke, Flu vaccine lead at the National Immunisation Advisory Committee.

Dr Clarke told RTÉ’s Morning Ireland that health care workers need to get vaccinated as it’s the best way they can protect themselves.

“It’s for their own protection so they don’t miss days off work and they’re not sick with complications.

“It’s also so they don’t transmit to vulnerable patients - if they’re looking after children, the elderly or pregnant women.

“They can act as a role model when they meet these vulnerable people and say ‘I’ve had my flu vaccine and it’s important that you get it too.’”

Dr Clarke said the HSE is working hard to raise the uptake rate with local and national management involved in communications campaigns.

“Some people might have misperceptions about why they shouldn’t get the vaccine. I’ve heard some say the vaccine give you the flu, it can’t because it’s composed of viruses. Secondly they say ‘I’m healthy I won’t get the flu.’

“Health care workers are ten times more likely to get the flu, so it’s very important that they get the flu vaccine,” she said.

The vaccine is free as is vaccination, added Dr Clarke. “It’s very easy to get it. Peer vaccinators are working in health institutions or they can get it through the local occupational health department.”

Acute hospitals and long stay institutions got a grant this year to improve their flu readiness, she said. “There’s lot of communication going on and local initiatives and incentives.

“The peer vaccination programme is working very hard now, coming around with trolleys at their place of work, people finding it very valuable.”