Gas supplies for Galway and Mayo to be restored by Sunday

Shell E&P Ireland has been burning off, or “flaring,” the odourless gas at the Corrib gas refinery in Co. Mayo since early Thursday morning. Video: Terence Conway 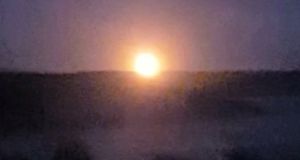 A screengrab from a video showing ‘flaring’ at the gas terminal at Ballinaboy in Co Mayo where odourless gas is being burned off.

Natural gas customers in two western counties who have been urged to turn off their supplies after odourless gas was pumped into the system have been told their supplies should be restored by Sunday.

Gas Networks Ireland (GNI) has advised customers in Galway and Mayo to switch off supplies at the gas meter box until further notice due to concerns that customers would not be able to smell leaking gas.

GNI said Galway city, the towns of Tuam and Headford in Co Galway and Ballinrobe, Castlebar, Claremorris, Westport, Crossmolina and Ballina in Co Mayo have had their gas supplies shut off.

GNI network safety manager Owen Wilson said GNI was working to establish how odourless gas entered the supply chain. The odour was not added due to a technical fault at the Shell E&P Ireland facility at Ballinaboy in Co Mayo. Without the smell, it is impossible to detect a gas leak.

He defended the speed with which the company had alerted customers and said the risk to customers was “very, very low”.

“We were notified in early hours of yesterday morning and dispatched resources to the area immediately, and we were monitoring gas levels throughout the day, taking samples and having them analysed.

“Yesterday afternoon we started to detect lower levels of odour, and in some case no levels of odour in the gas, that’s when we took the decision to inform customers on the action that needed to be taken.”

The odourless gas within the system is being pumped to the terminal at Ballinaboy where it is being burned in a process called “flaring”. This process began early on Friday and is expected to continue on Friday.

“We are working with the Corrib operator to resolve this issue and remove the un-odourised gas from the network in a safe and controlled fashion. Our best estimate is that this may take between 48 and 72 hours,” said Mr Wilson.

He said GNI had to establish the extent of the issue before making a decision. “To do anything else would have been irresponsible and as soon as we were aware of the full extent of the issue and the action needed to be taken we communicated that to customers.”

Mr Wilson said their priority now was to resolve the situation safely and minimise disruption to customers.

“We will be working with the terminal operator and the regulatory authorities to establish the facts so we can learn the lessons to prevent this happening again.”

He added that the risk “is actually very, very low, but the issue is that we add odourant to the gas so that it can be smelled in the event of a leak. Without that odourant a leak couldn’t be detected,” he told RTÉ’s Morning Ireland.

“Now the risk is very, very low, but safety is our top priority and we’ve taken this action to ensure that risk remains very low.

“We’ve had crews working all night to reintroduce odourised gas into the network, effectively push that odourised gas back to the Corrib terminal where it came from.

“We’re making very good progress. At the moment our best estimate is that we’ll have customers back on gas by Sunday afternoon. We’ve got resources working around the clock to do that as quickly and safely as possible. If we can bring that forward we will be bringing that forward.”

The Minister for Rural and Community Development Michael Ring called for an investigation into the technical fault.

The Mayo TD said he had been assured in the past that an incident such as this could not happen and he now wanted answers.

“I am concerned that this dangerous substance was released,” he told RTÉ’s News at One.

When asked what State agencies should carry out such a report, he replied the EPA, Gas Networks Ireland and the commission that regulates gas companies.

“We need a report so we can ensure this never happens again.

“We were told in the past that this plant was 100 per cent proof. I want to know what happened.”