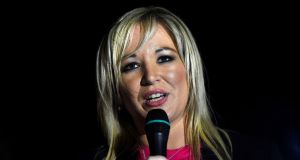 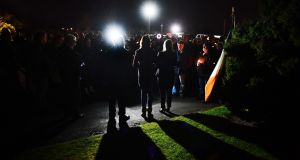 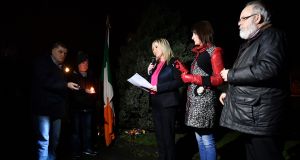 When launching his party’s manifesto in Belfast on Thursday Mr Allister said it was “appalling” that Ms O’Neill was the main speaker at the event in her native Clonoe in Co Tyrone.

The IRA members had earlier mounted a machine-gun attack on nearby Coalisland RUC station. No one was injured in that incident. Republicans suspected that the men were set up by an informer.

It also spoke “volumes of the amoral state of politics that’s betokened by Sinn Féin”, he added.

A Sinn Féin spokesman speaking before the event said the commemoration was being “carried out in a respectful and dignified manner to remember the four young local men and to importantly show community solidarity with their families, friends and neighbours”.

At the TUV manifesto launch Mr Allister also said that it should be the Republic and not Northern Ireland that should be seeking special European Union status because of Brexit.

He said the people of Britain and Northern Ireland would have a “glorious” future out of the EU and predicted that the Republic eventually might follow the UK’s lead.

“I do think that in time, as Brexit proves to be the success that it will be, that our neighbours, though it will be a matter entirely for them, will come to see the wisdom of following us out of the EU and pursuing growth in parts of the world where the trade now is,” said Mr Allister.

1 Healthy one day, ventilated the next – a Covid-19 survivor’s story
2 The FinCEN files: The billion dollar a month money trail
3 Coronavirus: 396 more cases as public is urged to help protect ‘older and vulnerable’
4 Gardaí break up rave attended by 60 people at Dublin flat complex
5 The far right rises: Its growth as a political force in Ireland
Real news has value SUBSCRIBE