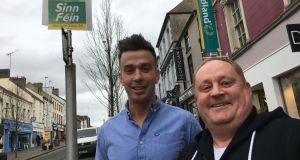 If opinion pollsters want to test the mood of the electorate in Northern Ireland, they could do worse than chat with Barbara, Sandra and Doreen on the main street of Omagh. “Everybody’s just so fed up,” said Doreen.

She and her two friends from Portadown were on a girls’ day out in the Tyrone market town, cruising up and down High Street on Thursday, examining shop windows for bargains.

“People are just at such a loose end,” Barbara chipped in. “There really was no call for an election.”

Everyone still remembers last May’s election. Thinking out loud, the three women wondered why there wasn’t some sort of list system so that, if people didn’t get on and resigned, they could be replaced by an already determined alternate.

But, notwithstanding that, which way did they think it would turn out after polling day? They hadn’t a clue and, while they did not say they didn’t care, it was apparent that the future governance of Northern Ireland was not the uppermost thought on their minds.

“Och, let them get on with it,” said Sandra. And off they went.

The intense lack of interest and fed-upness, for want of a better word, is striking when voters – in Belfast, Derry or Omagh – are asked for their views as to the North’s assembly elections, now less than two weeks away. The poll was caused by Sinn Féin pulling the plug on the Assembly, the party itself fed up with what it sees as Democratic Unionist Party Arlene Foster’s repeated put-downs and her refusal to “step aside” while her role in the Renewable Heat Incentive (RHI) fuel grant system is investigated.

Emmet and Chris may not be among them.

Emmet Mullen (31) is a professional poker player, a likely lad and cheery sort of fellow dressed in an open-necked blue shirt, blue jeans and soft shoes. His pal, Chris Fisher (42), is an equally happy-go-lucky painter and decorator.

Both are Sinn Féin supporters but, right now, neither is likely to vote on March 2nd.

“Pointless,” said Emmet when asked why, as he and Chris chatted in Omagh. “The whole thing is pointless.”

Emmet wants to hear talk about a united Ireland being on the agenda.

“I don’t think we’re getting closer to getting Britain out of Ireland so what’s the point [of voting]?” he asked.

He could not understand how anyone could vote for Arlene Foster, who is running in the neighbouring constituency of Fermanagh and South Tyrone. “Even if [the RHI scheme] wasn’t corrupt, it was gross incompetence,” said Chris.

As erstwhile supporters of Sinn Féin, who might they vote for if they did vote?

“If there had been a People Before Profit (PBP) candidate in West Tyrone, I’d have voted for them,” said Emmet, before leaving for the Regency Hotel in Dublin for a poker tournament, fresh from a recent triumph there that netted him a cool €6,800.

PBP may yet lament running in just six of the North’s 18 constituencies.

Anecdotal evidence indicates a high degree of voter awareness of the party (in Derry, Eamonn McCann’s election poster, in which he looks like the wide-mouth frog, is easily the most noticeable) and a Lucid Talk monthly tracker poll in late January suggested PBP support had risen from 2 per cent to 2.7 per cent.

The same poll suggested the total unionist vote had fallen from 47.9 per cent of the electorate to 46.3 per cent. Nationalist support had risen from 39.3 per cent to 40.2 per cent and the middle-ground vote (Green Party, Alliance Party etc) had gone from 8.5 per cent to 12.7 per cent.

That bigger picture opinion snapshot suggests little change from March 3rd and Sinn Féin has already said it will not support Arlene Foster for any ministerial office (First or Deputy First Minister) until the RHI issue is dealt with.

“It’s a shambles,” said a late-middle-aged Omagh High Street businessman who requested anonymity. “I don’t know that after the election it will be much different.”

A cross-party voter whose parents moved into Northern Ireland from Donegal after partition, said that integrity mattered in business but seemed not to in politics.

People would not vote for a united Ireland, if they were given the chance to vote for it, he believed.

While the South had made “absolutely fantastic strides in the last 35 years”, he estimated that a large majority in Northern Ireland, looking at benefits such as the National Health Service, would vote to stay within the UK.

But in the meantime, like Barbara, Sandra and Doreen, he just wants the politicians to “get on with it”.

“You have to work with people,” he said. “And you have to be realistic and not have demands that are impossible to realise.”