Tributes to role of Cork Volunteers in 1916 Rising 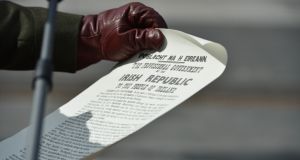 The Proclaimation is read during a commemorative ceremony to mark the 100th anniversary of the 1916 Rising at the National Monument on Grand Parade, Cork City on monday. Photograph: Michael Mac Sweeney/Provision. 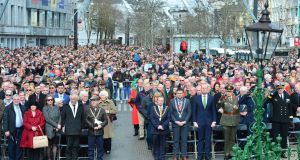 Thousands attended a commemorative ceremony to mark the 100th anniversary of the 1916 Rising at the National Monument on Grand Parade in Cork city on monday. Photograph: Michael MacSweeney/Provision.

Thousands gathered in Cork city on Monday to commemorate the 1916 Easter Rising which saw over 1,000 Irish Volunteers mobilised in the city and county.

Minister for Defence Simon Coveney told the ceremony on the Grand Parade, attended by many whose relatives were involved in Cork during Easter week a century ago, that it was important to remember their role in paving the way for the foundation of the State.

“For many of you present here today, this is a personal journey. It’s a journey, not just into family memory but national and indeed, international history. Your ancestors were part of a movement that changed the fault lines of history for Ireland, ” he told the 8,000 strong crowd.

“Their actions along with those of the other Volunteers in Dublin, Wexford, Galway, Meath, Kerry and elsewhere in that momentous Easter Week in 1916 contributed in a major way to the establishment of this State.”

Mr Coveney said it was important to remember the Easter Rising in an inclusive way that recognised the complexity of time as well as acknowledge the courage, vision, idealism and determination of those who went out to create a free Ireland.

“We rightly remember those who fought and died for Irish freedom in 1916 and while we commemorate them, we are mindful the Rising also resulted in the deaths of British Army and police personnel, many of whom were Irish, and that the majority of those who died were civilians including many children.”

The Lord Mayor of Cork, Cllr Chris O’Leary paid tribute to the Cork men involved in the Rising including Sean Hurley from Drinagh, who died fighting in Dublin; Richard Kent, who was fatally wounded in a firefight with the RIC in Castlelyons; and his brother, Thomas, who was later executed.

The Mayor of County Cork, Cllr John Paul O’Shea, recalled that close to 50 Irish Volunteer companies mobilised in Cork on Easter Sunday at places like Bweeng, Newmarket, Carriganima and Kealkill only to later find out - or so they thought - that the Rising had been cancelled.

Cllr O’Shea recalled the central role of IRB man Diarmuid Lynch, from Tracton, in planning the Rising and other Corkmen such as Michael Collins, Gearoid O’Sullivan and Tom Hunter playing central roles in Dublin while Tomas Mac Curtain and Terence Mac Swiney led the Volunteers in Cork.

Wreaths were laid at the National Monument by Mr Coveney and the two mayors while the Proclamation was read by Lt Cian Clancy and the Air Corps did a fly past before the tricolour was raised and the National Anthem was played by the Defence Forces Army 1st Brigade Band.

Among the dignitaries in attendance were Fianna Fail leader, Micheal Martin TD, Church of Ireland Bishop Paul Colton of Cork, Cloyne and Ross, Commodore Hugh Tully of the Naval Service, Brigadier General Philip Brennan of the Army and Chief Supt Michael Finn of an Garda Siochana.

Among the many relatives of those involved in 1916 to attend the event was Fionnuala Mac Curtain, granddaughter of Tomas Mac Curtain who led the Irish Volunteers in Cork as they occupied the Volunteer Hall on Sheares Street where they engaged in a week long stand-off with the British.

“It’s very important that not only my grandfather is remembered but also the men who stood with him. He would never have wanted to be singled out on his own - he would have stood as a leader of men but with his men- there was no one hero, they were all heroes with him,” she said.

“It wasn’t that they were less patriotic in Cork - it was just that they got order and counter order - therefore they would have risen the same as the GPO had they got in the orders in time so I’m glad that they are being remembered too today here in Cork for their part in Easter 1916.”

Earlier, Cllr O’Leary and Cllr O’Shea unveiled a plaque on the former Volunteer Hall on Sheares Street to mark Easter 1916 when 400 volunteers under Mac Curtain and Mac Swiney occupied the hall in a stand-off with the British authorities.