O’Mahony a popular entertainer in mid-Cork during the 1990s – a talented, lively performer 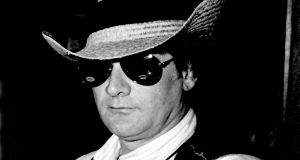 Tributes have been paid to Macroom fire victim Noel O’Mahony who achieved a reputation as a popular entertainer in mid-Cork and surrounding areas in the 1990s.

A successful builder who supplied pre-fabricated classrooms to schools all over Ireland, Mr O’Mahony’s musical career began as a result of a bet one day in O’Riada’s pub in Macroom.

Musician turned barrister John O’Callaghan explained that Garth Brooks was in his prime at the time and when he came on the radio, Mr O’Mahony was less than impressed with his singing.

“Noel basically said that anyone could sing that old rubbish so he took up a challenge that he could do as well and that’s how he started singing around venues in Macroom and mid-Cork.

“He bet that if he could get a band together and draw a crowd in O’Riadas – if they were bad, he would cover the cost but if the crowd went home happy, he would get the takings at the door.

“That’s how Leon Haymoon, which was an anagram of Noel O’Mahony, and The Ghost Town Tumbleweeds were formed and that night was such a success that we started to gig together.”

Mr O’Callaghan recalled how he and the other members of his band, Nashville Live together with guitarist Willie Burke were recast as The Ghost Town Tumbleweeds to back the energetic frontman.

“We used to do a diverse set of covers. We would open with Noel singing Garth Brooks’s Friends in Low Places and we would close with Neil Diamond’s Sweet Caroline.

“In between we could do anything, but one of Noel’s favourites was Edison Lighthouse’s Love Grows Where My Rosemary Goes; and when he gave that socks it used to go down a treat.

“We played O’Riadas several times after that first gig and the place would be packed with 500 or 600 people – so packed they used to open the doors and people would be dancing in the car park.

“I’ve played with a lot of really talented singers like Linda Martin but I can say that I never played with a more entertaining and enjoyable performer than Noel O’Mahony. He was great fun.”

“It’s a terribly sad and tragic end for such a lovely, lively man. My sympathies are with his family and everyone who knew him because he really was great company and great fun to be with.”

Mr O’Mahony, who was from Cackanode, Clondrohid outside Macroom, is survived by his wife Sheila and adult daughters, Noreen, Paula and Joanne as well as other relatives.