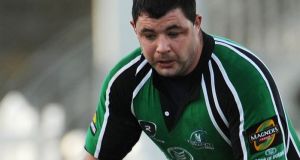 A file image from 2008 of Kevin Moran in action for Connacht A in a friendly with Leinster A at the RDS in Dublin. Photograph: Sportsfile

Tributes have been paid to a sports man from Co Mayo who was killed in a road crash in Australia over the weekend.

Kevin Moran, aged in his early 30s and from the village of Mulranny, was living in Australia when he was killed in a crash on Friday.

Achill Rovers would like to send our deepest condolences to the family and friends of Kevin Moran who tragically... https://t.co/3L8L67m8cz

Mr Moran represented Connacht Rugby at underage and A level and also played rugby for the Westport Bulls. He played soccer with Achill Rovers for many years.

Members of the Achill Rovers paid tribute to Mr Moran on social media and sent condolences to his family and friends.