Trains using Phoenix Park tunnel will not stop at Heuston

The National Transport Authority (NTA) previously announced plans to start passenger services to connect the city’s two main stations through the 138-year-old tunnel line between Connolly and Heuston. The journey would take about eight minutes. 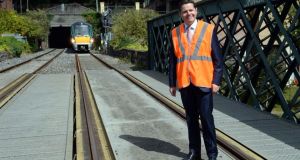 Minister for Transport, Tourism and Sport Paschal Donohoe at the launch of the project to upgrade the Phoenix Park Tunnel and provide train services from Kildare to Grand Canal Dock. Photograph: Eric Luke

Commuter trains using the Phoenix Park tunnel as of next year will not be stopping at Heuston Station.

The tunnel links the two largest stations in Dublin.

A project to reopen the tunnel link to passenger services linking the southwest commuter belt to the coastal railway was launched by Minister for Transport Paschal Donohoe on Tuesday.

From autumn 2016, commuter trains from Kildare, Sallins, Hazelhatch and Cherry Orchard will be able to travel through the tunnel beside Heuston Station and loop around the north city to Connolly station, before continuing on to Pearse and Grand Canal stations.

Mr Donohue, who visited the tunnel with National Transport Authority chief executive Anne Graham to inspect work on the €13.7 million project, said the new service would offer “frequent services directly into the heart of the south city business district”.

Mr Donohoe said the link would also offer “an attractive alternative for private motorists who currently commute into the city along the N7 corridor”.

The opening of the tunnel to scheduled passenger services, which Iarnród Éireann has previously said is not a replacement for its ambitious €1 billion Dart Underground project, has been put forward a number of times in recent decades and is now seen as a key element of the new Dublin transport strategy.

Restrictions on private cars based on works to improve public transport in Dublin city centre have already begun and the proposed strategy envisages further restrictions when the cross-city Luas opens in 2017.

These include a permanent “bus only gate” at College Green and greater provision for pedestrians and cyclists, with restrictions on private car use at pivotal points on the city quays.

The project to upgrade the Phoenix Park tunnel requires ongoing resignalling works between Connolly and Grand Canal Dock, but Mr Donohoe said he was confident up to four services per hour would be using the tunnel next year.

Asked why trains on the tunnel link will not stop at Heuston, Mr Donohoe said commuters on the Kildare line would have a choice, as some trains would continue to terminate in Heuston station as before, while others would use the Tunnel.

He said the chief difficulty in having all trains stopping in Heuston was that Platform 10, which would serve the tunnel route, is a considerable walk from the main station concourse. However, he said, in time he expects Platform 10 to be used.

The move means commuters from southwest Dublin will have to be aware of which part of Dublin is served by their trains in future. If they cannot alight at Heuston, the next stop would be Drumcondra.

The restriction also means rail users from south Dublin will not be able to use the tunnel link to access Heuston and regional services there. Such passengers will have to continue to get off at Connolly station and take a tram to Heuston Station.