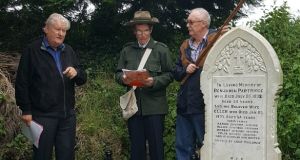 At William Partridge’s graveside: Trade unionist Des Geraghty (left) said Partridge, who died in 1917, “exposed the atrocious living conditions of workers and their families in the whole of Dublin during his lifetime”. Photograph: Patsy McGarry

Trade unionist Des Geraghty has recalled how a Dublin Corporation study in 1903 established that “virtually 60 per cent of Dublin families, with an average 4/5 people, lived in one or two rooms”.

Secretary to the committee which prepared the study was Ballaghaderreen man William Partridge, then an active trade unionist in Dublin and later a city councillor. “It is worth noting that just as homelessness and housing are still major issues of concern now, for modern-day Dublin and Ireland generally, housing and diseases related to poor sanitation were the most serious threat facing poor families in Partridge’s time,” Mr Geraghty said.

Partridge “exposed the atrocious living conditions of workers and their families in the whole of Dublin during his lifetime”, he said.

Mr Geraghty was delivering the William Partridge Commemorative Lecture at the Douglas Hyde Centre in Portahard, Co Roscommon, on Saturday.

Born in 1874, William Partridge grew up in Ballaghaderreen before going to work in Dublin at age 17 in the railway workshops at Broadstone. An active trade unionist, he was a city councillor from 1904 to 1906 and from 1913 until his death in 1917.

A close confidant of key figures such as James Connolly and Jim Larkin, he played a central role in the 1913 Lock Out and the setting up of the Irish Citizen Army in 1914, and fought at the Royal College of Surgeons during the 1916 Rising, after which he was sentenced to 15 years penal servitude. He contracted Brights disease and was released to die at home in Ballaghaderreen at age 43 in July 1917.

At his funeral there on July 28th of that year, Constance Markievicz described him as “the purest soul and noblest patriot Ireland ever had” before firing three shots over his grave with her own pistol.

Earlier on Saturday, members of the Dublin-based Clé Club laid a wreath at Partridge’s grave with music from piper Ned Pocock. Clé Club cathaoirleach Des Geraghy recalled how how his late brother Hugh Geraghty, who died suddenly 10 years ago in 2007, had written a biography of William Partridge.

“Hugh has established that William Patridge was indeed a most significant figure of Irish Labour, clearly deserving of much greater recognition than he has received in the last 100 years,” he said.

In a lecture at the library in Ballaghaderreen, Honor Ó Brolchain, grandniece of executed 1916 leader Joseph Mary Plunkett, recalled how between 1916 and 1923, eight members of the family were jailed and/or killed.

Tracing the growth in wealth of the Plunketts in Dublin following Catholic Emancipation in 1829, she noted how “Joe” Plunkett’s father, Count Plunkett, had attended Trinity College, where his friends included Isaac Butt, Oscar Wilde, Charles Stuart Parnell, Roger Casement, Bram Stoker and Douglas Hyde, with whom he founded the Society for the Preservation of the Irish Language.

A knight of the Catholic Church, Count Plunkett was forced to leave Ireland after the Rising, but returned illegally to contest the North Roscommon byelection of February 1917. Described as “probably the most important election in Irish history”, his campaign for it was organised mainly by Fr Michael O’Flanagan. Plunkett took the seat from the Irish Party.

Among those involved in the campaign were Michael Collins, Arthur Griffith, Michael Staines and Rory O’Connor. The result was a portent of elections to come in Longford, Clare and Kilkenny. “Many young men were frustrated at not being out for the Rising and they were ready for something,” said Ms Ó Brolchain.

On his election in Roscommon, Count Plunkett announced “a declaration of abstention for the first time”, she said. He died in 1948 and was given a State funeral. He and Fr O’Flanagan are buried near one another in Glasnevin.

A second commemoration of William Partridge will take place in Ballaghaderreen next Saturday, July 22nd. Organised by Sinn Fein, speakers will include Senator Padraig McLoughlin and NUIG historian Conor McNamara.

1 Tyrone midwife on the cover of Vogue magazine
2 Pubs reopening will not mean ‘fellas having a few pints and peanuts’, Holohan warns
3 ‘White Irish people have never had to think about this’
4 Donald Trump is in trouble, and that could spell very bad news
5 Trump’s claim it was a ‘great day’ for George Floyd is criticised
Real news has value SUBSCRIBE