Cars covered after US road ‘slimed’ with spillage of 3,400kg hagfish consignment 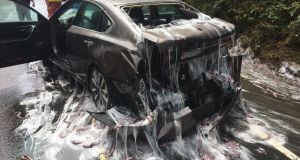 Cars were stopped after a truck carrying eels overturned in the US. Photograph: Oregon Fire Department/Twitter

An Oregon highway has been “slimed” after a truck carrying 3,400kg (7,500lb) of eels overturned, spilling the animals and their excretions all over the road and nearby vehicles.

The accident occurred on highway 101 just south of Depoe Bay in Oregon, US, early on Thursday afternoon. No one was injured, according to police, but multiple cars were affected and one lane of the highway was closed while the cleanup took place.

According to the Oregonian and the fire department, the animals are not technically eels and are in fact Hagfish - prehistoric creatures with skulls but no jaw or spine, which produce slime through glands on their sides, especially when stressed. They are colloquially known as “slime eels”, for obvious reasons.

Hagfish are caught along the west coast of the US, including Oregon, and exported to Korea where they are a delicacy. Oregon state police tweeted that the eels were being shipped to Korea for consumption.

With no injuries to report, local authorities seemed to be having a good time with the unusual incident. Oregon state police on Thursday posted a photo to Twitter that showed damaged cars covered by the gooey eels with the question: “What to tell the #drycleaner?”

The Depoe Bay fire department posted a video of workers using a bulldozer, apparently provided by the department of transport, to clear the eels.

A successful “operation cleanup” meant both lanes of the highway were able to be opened at around 4pm on Thursday afternoon.

But plenty of eels and their slime remain by the road.