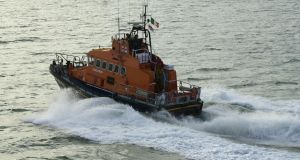 Three fishermen were rescued from a sinking boat about 32km off the west Cork coast on Monday evening.

A lifeboat from Courtmacsherry came to aid of the men within an hour of their distress call from the 60ft fishing vessel.

Vincent O’Donovan of Courtmacsherry Royal National Lifeboat Institution (RNLI) said conditions at sea were very poor at the time of the incident, with strong winds and heavy swells in the area.

The vessel had been taking in water rapidly.

However, the lifeboat crew succeeded in transferring its mobile pump and crew to the trawler in order to stem the intake of water.

The Naval Vessel the LÉ Niamh also took part in the rescue, while a Coast Guard helicopter was tasked from Waterford.

Mr O’Donovan said the lifeboat took the stricken vessel in tow and headed back to west Cork.

It was due to reach Union Hall at 10.30pm on Monday night.