Thousands of protestors turn out to oppose water charges 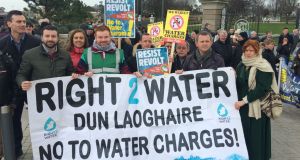 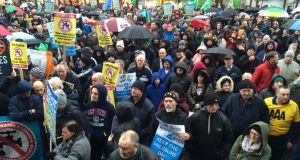 Thousands of protestors turned out to oppose water charges at Right2Water demonstrations across the country on Saturday.

In Dublin City Centre, at the largest rally, community and political groups were joined by representatives from six trade unions.

Two groups made their way separately from Christchurch and from Connolly Station, via the quays, to congregate at the GPO, bringing city centre traffic to a standstill.

Brendan Ogle, Unite and Right2Water spokesman, told the crowd the “gombeen parties” of Fianna Fáil, Fine Gael and Labour had ruled the country since independence and it needed to stop. He asked at how many more elections “spoofers” and “corrupt politicians” were going to be voted in and said if they were voted in again, then the country was getting what it deserved.

He also called on Taoiseach Enda Kenny to call the election.

Ms McDonald said if the government thought they had got away with “water charges, family home tax and cutbacks” they were wrong. She said a government of Sinn Féin and others would abolish waters charges.

Fr McVerry told the crowd the government had failed to address the hardship and suffering of the people and said the homeless crisis of the last two years had grown into an emergency.

But he defended Minister for the Environment Alan Kelly’s record on homelessness and told the crowd the minister had wanted a cap on rents, but it had been opposed by Minister for Social Protection, Joan Burton.

He also queried why homelessness figures for last November and December had not yet been released.

The march and rally was organised by the Right2Water campaign with particpants from Sinn Fein, the People Before Profit Alliance, the People’s Convention, the Communist Party of Ireland, the Workers Party and the Anti-Austerity Alliance.

John Lonergan of the Right2Water campaign got a huge response when he reminded protestors that a Government politician had once remarked “water doesn’t fall from the sky.”

“What planet are they on? “ said Mr Lonergan to loud laughs as the sheeting rain came bucketing down on the crowd gathered outside Cork City Library on the Grand Parade.

“We are not politically aligned but we know a vote for the Fine Girl - Fine Gael, the Feel and Fail - Fianna Fail and the Maternity Party - Labour - is a vote for water privatisation and water charges.”

Protestors heard Belfast based activist, Stephen Nolan from Trademark, the anti-sectarian unit of the ICTU, criticise the Government for its failure to face down the bond holders over the debt crisis.

“Joan Burton said last week our arguments about the bank debt and the bailout were redundant - she better get used to that word because that’s what she will be in a few weeks, redundant.

“Our argument is not redundant because that debt is still with us even though it’s not our debt - €60 billion of a stake, the last €5 billion of which won’t be paid until 2053 - by our grandchildren.”

Anti-water charge campaigner from Cobh, Karen Doyle reiterated her opposition to paying the charge and reminded people that there was an alternative to the water charge system.

“We have a yearning for a better way and when our government brings in bad laws that take away our human rights - we will break those bad laws - we will fill our courts with noble lawbreakers.”

“Community activists - know your place - it is to hold this revolutionary space and to nurture its growth and to gift it to the world,” said Ms Doyle.

Mayfield activist, Karen Collins said the government owed them an apology after seeking to portray them as terrorists following a bomb scare at Environment Minister Alan Kelly’s office in 2014.

“They tried to put us down in the eyes of our communities by insinuating we were the extremists, but it turned out that the threats Alan Kelly received had nothing to do with the Water Warriors of Éire.

“And it’s a simple as that and don’t let them tell you any different,” said Ms Collins who asked why was the water infrastructure so bad when Irish people already pay €1.2 billion per annum for water

Water charges were introduced in January, 2015, with the first bills received by householders in April.

Mr Kelly also said earlier this month that water was off his agenda. He said it was now only taking up “3-5 per cent” of his time. And Minister for Finance Michael Noonan said demonstrators had gone away.

Campaigners said Saturday’s protests were part of sustained action, which will include a conference and another demonstration on the last Saturday before the election.

Saturday’s events also coincided with the Fine Gael Ard Fheis, being held at Citywest, on the outskirts of Dublin.

Campaign spokesman and Mandate general secretary John Douglas said the demonstrations were a step towards making water charges the number one issue for the election.

“Water charges are an unfair imposition on the public and they serve no purpose other than a transfer of wealth from the poorest to the wealthiest in our society and they’re also about lining up the future privatisation of our water services,” he said.

Deputy Richard Boyd Barrett (PBP), who addressed a protest in Dun Laoghaire on Saturday morning, as well as the city centre rally, said the majority of people oppose water charges. “This or any future government has no mandate to impose this unfair austerity tax,” he said.