Thousands gather in Macroom for funeral of politician Donal Creed 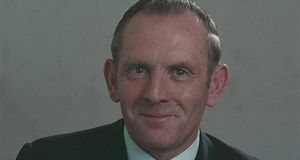 Thousands of people queued for several hours to pay their respects to former Fine Gael TD and minister of state Donal Creed who died on Thursday, at 93, following poor health in recent years.

An estimated 8,000 attended Mr Creed’s removal from Fitz-Gerald’s Funeral Home in Macroom on Saturday afternoon, in one of the biggest removals ever seen in the Cork town, with mourners gathering from 3.30pm to pay their respects.

When Mr Creed’s remains were removed to St Colman’s Church in the town at 9pm, an estimated 8,000 people had come to sympathise with Mr Creed’s widow, Madeline and their adult children, Marcella, Michelle, Madeleine, Suzanne, Louise and Michael.

Mr Creed was the father of Minister for Agriculture Michael Creed and among those to pay their respects were several of his Cabinet colleagues including Minister for Foreign Affairs Simon Coveney, Minister for Justice Charlie Flanagan and Minister for Culture, Heritage and the Gaeltacht Heather Humphreys. Minister of State Jim Daly was among those who came to sympathise as was former Cork All-Ireland winning footballer, Colman Corrigan.

Local Cork North West Fianna Fáil TD Aindrias Moynihan also attended as did his father, Donal Moynihan, who was a constituency colleague of Mr Creed from 1982 until 1989 when Mr Creed retired and was succeeded by his son, Michael.

First elected in 1965 for the old Mid-Cork constituency, Mr Creed was re-elected at a further seven general elections, switching in 1981 to the newly formed Cork North West constituency. He served for 22 years in the Dáil.

One of Ireland’s first MEPs, he served as a minister of state at the Department of Health under Garret FitzGerald in the short-lived 1981 Fine Gael Labour coalition, and again in November 1982 when Mr FitzGerald led Fine Gael back into coalition government with Labour. As a minister of state he oversaw the establishment of the National Lottery to raise funds for sport. He was dismissed during a reshuffle in February 1986 and he retired from politics three years later.

Among those to pay tribute was former Cork East Fianna Fáil TD Ned O’Keeffe who said he had marked the late Mr Creed when Fianna Fáil was in opposition in the mid 1980s.

“I always found him a very straight honourable man. I had disagreements with him when, as minster of state with responsibility for sport, he steered the National Lottery Bill through the Dáil but I always found him very fair and understanding of the opposition point of view.

“He had an excellent knowledge of agriculture and to my mind, it was a loss that he was never minister of agriculture, but coming from my side of the house, I would say he was very fair at all times and very genuine and a good man to have a chat with.”