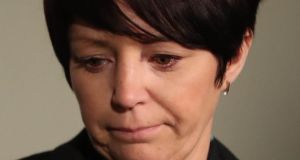 Louise James outside the Lake of Shadows Hotel in Buncrana, Co Donegal following the inquest into the deaths of her partner Seán McGrotty, sons Evan and Mark, sister Jodie Lee Daniels and mother Ruth Daniels, who died when their car slipped off Buncrana pier in Co Donegal in March 2016. Photograph: Niall Carson/PA

The woman who lost five family members in the Buncrana pier drowning tragedy has taken a High Court case against Donegal County Council and the estate of her late partner.

Louise James lodged papers in the High Court last June naming the council and Declan Hegarty, the solicitor presenting the estate of her partner Seán McGrotty, as defendants.

It is understood Ms James, who is represented by Anderson and Gallagher Solicitors, is alleging the council were partly at fault for the tragedy because the slipway on the pier should not have been accessible by the public.

The case has not progressed since July. It has been on hold pending the results of an inquest into the deaths, which concluded this week.

On Thursday a jury at the inquest found that the victims died by drowning and it was a case of death by misadventure.

In issuing its verdict the jury recommended that the Irish Water Safety organisation should play a prominent advisory role in trying to prevent any such future tragedies.

The couple’s baby, Rioghnach-Ann, was the sole survivor of the tragedy when she was rescued by passerby Davitt Walsh.

The inquest heard Mr McGrotty, who was in the driver’s seat, was over three times the legal alcohol limit.

After the verdict, Ms James’s solicitor read out a statement on her behalf.

“He was a wonderful partner to me, and an adoring father to his children. He lived for them,” it said.

“And it is clear from what this inquest has heard that in fact he died as he lived in that he could have saved himself but chose not to,” the statement read.

“I firmly believe that the slipway should have been closed to the general public or else proper warning signs displayed, as it was an accident waiting to happen,” Ms James added.