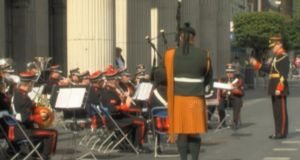 Thousands lined O’Connell Street this afternoon to commemorate the 1913 Lockout in which an estimated 20,000 workers and 300 employers were invloved.

President Michael D Higgins set a wreath at the foot of the Jim Larkin’s statue after a salute by the Army No 1 band.

Tainaiste Eamon Gilmore together with Ministers Ruairi Quinn and Pat Rabbite and Jimmy Deenihan were also in attendance.

In traditional costumes and dress people recreated scenes from the 100-year old events, chanting “Down with Murphy, up with Larkin” while police officers looked in.

There were readings by Bryan Murray and Angela Harding from the book Strumpet City, a historical novel which is set in the capital , and an excerpt from ANU’s critically acclaimed play “Lockout 1913” atop a tram placed in front of the GPO.

Lord mayor of Dublin Oisin Quinn welcomed everyone to the event saying the event was about paying tribute to “thousand of working men and women who took part in this campaign to achieve decent treatment and fairness of work”.

Hundreds of people dressed in period costumes as dockers, others as Jacobs workers and still more as the poor of Dublin. This part of the event was organised by the North Inner City Heritage Group with Dublin Council of Trade Unions.

The commemoration started at 12.30pm when Mr Higgins arrived on O’Connell Street to lay the wreath.

Actors Bryan Murray and Angela Harding, who both starred in the RTÉ adaptation of Strumpet City, read extracts from the novel.

The President remained as a spectator for a dramatisation of Larkin’s famous speech from a hotel window off O’Connell Street, his subsequent arrest and the riot that led to a police baton charge that resulted in more than 300 injuries.

The city centre remains open for business, including all car parks, but no buses will run on O’Connell Street between 11am and 3pm. Buses normally travelling on this street will be diverted. The Luas Red Line will operate as normal.