‘The station is just a building with an insulated roof’, says officer in Mayo 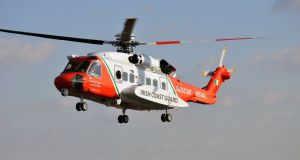 The Department of Transport describes the Coast Guard as Ireland’s “fourth blue light” emergency service after the ambulance, fire brigade and Garda

A third of all Coast Guard stations and buildings around the country have no basic facilities such as running water or bathrooms.

A senior Irish Coast Guard officer told The Irish Times his search and rescue team is forced to use “the nearest fence” for a toilet despite a 15-year fight for rudimentary upgrading.

Figures released by the Department of Transport show 19 of the 58 Coast Guard stations and sub-stations dotted along the State’s shores are without running water, bathroom facilities or access to the internet.

Seventeen of these are the distinctive and still-used traditional “Rocket Houses”, so-called from their storing the old Breeches Buoy rescue rockets during the 19th and 20th centuries.

The department – which itself describes the Coast Guard as Ireland’s “fourth blue light” emergency service after the ambulance, fire brigade and Garda – said 10 of the stations are sub-units or secondary buildings to a main Coast Guard station.

The seven main stations without any basic facilities include Castlefreke and Guileen stations, in Co Cork; Cleggan in Co Galway; Glenderry in Co Kerry; Ballyglass in Co Mayo; as well as Fethard-on-Sea and Kilmore Quay in Co Wexford.

“The station is just a building with an insulated roof, it has some heaters in it, and our radio equipment and pager,” he said.

“We have to go to an outside tap at the pier for water, we have no fridge or anything.”

Asked what happens if a volunteer needs to use a toilet, he replied: “The nearest fence.”

Mr Hurst said: “Look, we come prepared. We are not coming here to go to the toilet, you have that done at home before going to the station. We have no other choice.”

Basic improvements would encourage volunteers to stay around after emergency call-outs for critical debriefing sessions. “You might have someone who has to go to bathroom and they are itching to get out the door,” he said.

“After a call out most volunteers head straight home because there is nothing there at the station, so you have to leave debriefs to the next time.”

Mr Hurst has given over a bedroom in his own house as the station office, while three cars parked outside are for the use of volunteers in emergencies. None of this is recompensed.

“I should be shouting off the rooftops day in, day out but we want to keep our service,” he said.

Fianna Fáil transport spokesman Robert Troy said the lack of even basic facilities at Coast Guard stations would surprise and appal most people. “It is an absolute disgrace,” he said.

A spokesman for the Department of Transport said building works and upgrades are carried out on Coast Guard stations on “a programmed basis through the Office of Public Works to ensure facilities are fit for purpose”.