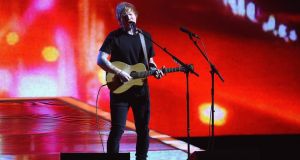 Concert promoter Peter Aiken has ruled out a third Ed Sheeran concert for Croke Park, despite the Yorkshire-born singer selling out two concerts at the Dublin venue in less than an hour.

Mr Aiken acknowledged that demand for Sheeran tickets was such that he could have sold out a third concert at Croke Park on top of the gigs on July 24th and 25th.

“He was a nice kid, but I’ve met a lot of nice kids in my time and I would never have foreseen that, in a couple of years’ time, he would sell 160,000 tickets in a hour for Croke Park.

“We could have done more Sheeran concerts but there won’t be another show, there can’t be,” said Mr Aiken.

The promoter said that this was due to the fact that Croke Park is limited to three concerts a year. The Script are already due to play the GAA headquarters on June 20th so there is no chance of a third Sheeran concert.

Live at the Marquee

Mr Aiken was speaking in Cork, where he revealed that Ellie Goulding and Beck have been added to the line-up of this year’s Live at the Marquee series, which is the biggest to date with 27 shows.

Starting in 2005, the Live at the Marquee series is this summer set to attract more than 100,000 music fans, with many of the gigs already selling out.

“When you look at the line-up this year, it just goes to show you how strong Irish music is at the moment . . . Irish acts do really, really well in Cork,” said Mr Aiken, noting that Kodaline and The Frames gigs sold out instantly.

Also making a return is Christy Moore, while other Irish acts include Damien Rice and Dara Ó Briain.

This year’s series runs from June 11th until July 13th.

For further information on this year’s Live at the Marquee concerts, please visit the Aiken Promotions website.