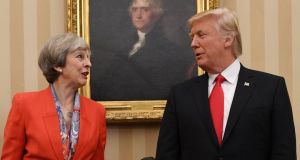 Post-Brexit trade deal: Theresa May has strongly signalled a desire to negotiate a bilateral agreement with the United States. Photograph: Stefan Rousseau/PA Wire

The British prime minister, Theresa May, has called Donald Trump to raise the UK’s “deep concern” about the American president’s plans to impose tariffs of 25 per cent on imports of steel and 10 per on aluminium amid US threats of a trade war with China and escalating tensions with the European Union.

Ms May had been due to call the president on Sunday to discuss the appalling situation in Syria, with the pair agreeing it was a humanitarian catastrophe driven by the Syrian regime and its backer, Russia, according to Downing Street. But she also turned to the question of Mr Trump’s comments on trade.

“The prime minister raised our deep concern at the president’s forthcoming announcement on steel and aluminium tariffs, noting that multilateral action was the only way to resolve the problem of global overcapacity in all parties’ interests,” said a Downing Street spokeswoman.

President Trump claimed on Twitter that his country was losing billions of dollars on trade, adding that “trade wars are good, and easy to win”. He also threatened taxes on European cars after the EU responded to the decisions on steel and aluminium by saying it could target US imports such as Harley-Davidson motorbikes, Levi’s jeans and Kentucky bourbon whiskey.

Ms May has strongly signalled a desire to negotiate a bilateral trade agreement with the US after Brexit, but critics said Mr Trump’s “America first” rhetoric underlined the potential danger of being too reliant on a transatlantic relationship.

And senior UK government figures said that plans to keep the United Kingdom closely tied to European standards after Brexit, outlined by the prime minister on Friday, had also cut the chances of a major trade deal with the US.

One cabinet minister said that sticking to EU regulations in a number of areas, particularly around industrial goods, would constrain the breadth of any future UK-US trade links.

If the E.U. wants to further increase their already massive tariffs and barriers on U.S. companies doing business there, we will simply apply a Tax on their Cars which freely pour into the U.S. They make it impossible for our cars (and more) to sell there. Big trade imbalance!

Sam Lowe, a trade expert at the Centre for European Reform think tank, agreed, arguing that convergence in those areas made “doing a deal with the US incredibly difficult, as the majority of their aggressive objectives involve removing regulatory barriers to trade, especially when it comes to food standards”.

He added that it would make sense for the UK to keep its focus on European links. “I’d question the logic of running into a trade deal with a president who sees trade less as a means of achieving mutual prosperity and more an instrument of war.”

But Jacob Rees-Mogg, the Tory MP who chairs the influential European Research Group, argued that the UK could still do a deal with the US, accepting its standards for imports to Britain. He said that could work as long as any goods falling below European standards were not then re-exported to the EU.

Ms May’s speech, in which she doubled down on red lines around the single market and customs union but promised close co-operation beyond that, has led to a fragile unity on government backbenches.

There has been some ministerial angst about briefings that have emerged in recent weeks, however. Cabinet members pushing for a softer Brexit were said to be irritated after an awayday at Chequers, the prime minister’s official country residence, to agree the contents of the speech was immediately characterised by sources as “divergence has won the day”. “It was more like divergence as a last resort,” said another source with knowledge of the meeting.

Senior MPs who supported remain, such as the treasury select-committee chair, Nicky Morgan, made clear they were happy with Ms May’s promise to prevent customs checks on the Irish Border, believing that would secure a sensible deal overall.

Ms May rebuffed the suggestion that her foreign secretary, Boris Johnson, had raised the spectre of a hard border between Northern Ireland and the Republic in an internal government report handed to the prime minister. “No. Boris is absolutely clear that there won’t be a hard border,” she told the BBC’s Andrew Marr Show.

Asked about the controversial paper in which the foreign secretary said it would be “wrong to see the task as maintaining ‘no border’ on the island of Ireland” and said even with a hard border 95 per cent of goods could pass without checks, she challenged the interpretation of his comments.

“He’s clear that there won’t be a hard border between Northern Ireland and Ireland, and we’re working to that,” she said. “We’ve got proposals as to how we can achieve that. Now we’re going to be able to sit down and talk with others about how we do that.”

Her comments came amid claims that her own chief of staff, Gavin Barwell, had leaked Mr Johnson’s paper to Sky News. Whitehall sources admitted there were suspicions that the leak had originated from Downing Street or the treasury, despite a strong denial from Barwell. They also said the prime minister had blocked Mr Johnson’s plea to publish the full document to place the argument in context.

Ms May reiterated her hopes for a customs agreement that would prevent a hard border. But Tánaiste Simon Coveney told Marr he was “not sure that the European Union will be able to support” the plan. He said it would be worried about protecting the integrity of the single market.

“While of course we will explore and look at all of the proposed British solutions, they are essentially a starting point in negotiations as opposed to an end point,” he said. – Guardian