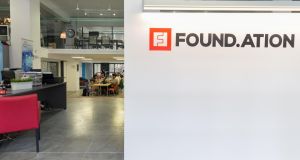 Greece has been in crisis now for a decade. Since sliding into recession in 2008, it has seen its annual output collapse by about a quarter. Its unemployment rate has been above 20 per cent for more than five years. Close to a half a million Greeks, mostly those with the best education and career prospects, have left the country to seek their fortunes elsewhere.

There have been few rays of hope to cling to in this dark period. One of them has been the steady emergence of the Greek start-up ecosystem. In the years since four EU-backed venture capital funds started operating in early 2013, there have been notable successes, including multimillion dollar investment rounds and buyouts by major global companies.

One active player in the Greek start-up scene has been Stavros Messinis, founder of CoLab, a co-working space in Athens, in 2009 and, in 2013, another space known as the Cube.

“We’re currently hosting around 20 companies. They are mainly software tech companies but we have one or two hardware companies, a software agency and even a company that makes trendy handbags,” Messinis says.

“We offer them facilities to work from, mentoring and other services such as legal and accounting. The fact that they’re together in a shared office means they help each other out.”

Kalavros-Gousiou (29) has been involved in the Greek start-up scene for much of the last decade. “Our main priority is to choose people over ideas, and teams over individuals,” he says. “We sit down with teams, and we try to examine their culture, thesis and ethics.” Over the past five years the Greek start-up sector “has matured dramatically”.

Messinis says the euphoria that comes after a successful investment in a local tech company is often followed by a “real slump”. In such times, Messinis explains, a “major challenge is the significant brain drain. Most developers worth their salt will emigrate during a funding slump when entrepreneurs aren’t being funded and hence can’t hire them. While the universities produce very good talent, there’s a limited supply of techies with project experience.”

One organisation that has focused on reversing the brain drain is Reload Greece, founded as an educational charity in London in 2012.

“Developing close ties with the ecosystem in Greece is key towards fulfilling our mission of bridging Greece with the rest of the world,” says Effie Kyrtata, the organisation’s chief executive.

Implementing these lessons back home can pose unpredictable challenges, such as those faced in Exarcheia – a hotbed of anarchist activism and criminality – by the denizens of the Cube.

“We chose to do something in a rather run-down part of the city because rent was low and we felt we could do something to uplift things,” Messinis says. “For now, we’ve succeeded. We had a significant problem with drug dealing in the area but since about six months ago, we’ve had a significant improvement by collaborating with the authorities while also holding them publicly accountable. Given the right encouragement, they act positively.”

Beyond that, what can the government do to help the 350-450 companies that make up the start-up sector? “We need to create incentives on tax, employability, ease to set up/operate and close a company,” says Kalavros-Gousiou. “And we need to do more to foster an entrepreneurial culture, that will mobilise private Greek money and even international start-ups and investors to start looking to Greece for opportunities.”