Tattooing over the scars of domestic violence

In Russia, a woman is transforming victims’ traces of their painful pasts into artwork 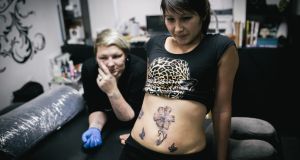 After being stabbed by her husband, Laysan receives a tattoo to cover the scar in Evguenia Zakhar’s tattoo studio in Ufa, Russia

Somewhere between counsellor and tattoo artist, 33-year-old Evguenia Zakhar transforms the scars of domestic violence victims into works of art in her tattoo studio in Ufa, Russia.

In a small basement at the corner of the main road, Evguenia is painstakingly outlining flowers along old scars. Facing her, arm outstretched, Dinara purses her lips in pain and stays silent. Only 20 years old, the young woman has been through more than most people twice her age. Having suffered beatings from her father, and then her husband, the young woman’s body is covered in traces of this painful past.

She has since left her partner and lives alone with her three-year-old daughter, Amelia. “Seeing my scars,” confides Dinara, “my daughter started to draw the same marks on her arms . . . I feel so ashamed, I can’t bear it.”

Two hours of work later, the scars are completely covered with small delicate flowers, tinged with blue. The traces of Dinara’s injuries actually make the insides of the flowers look more realistic.

Warm and naturally optimistic, Evguenia has been working as a tattoo artist for 10 years, alongside her partner, Alexeï. “It was the natural choice for me to become a tattoo artist, because I liked drawing but I did not want to curb my creativity at art college,” she explains.

Covers all the costs

Last August, Evguenia came across the work A Pele da Flor [Flower-like Skin] by Brazilian tattoo artist Flavia Carvalho, who covered over the scars of female victims of domestic violence. Inspired, the young Russian decided to follow her example by offering her services for free via the Russian social network, Vkontakte.

The tattooist was surprised by how popular her offer was. “In just one week, I already had 50 requests,” she says. Over six months, more than 200 women found themselves beneath the expert hands of Evguenia, who dedicates every Monday to these tattoos. She offers them for free, covering all the costs involved.

Tattooing victims of domestic violence has come to be more than just a job. “On top of helping them, I leave my mark on the world. The majority of my clients are younger than I am, and when I am gone, they will continue to bear my tattoos, which reminds them that a new start is possible,” she explains.

For the women who come to the studio, Evguenia is unmistakably an artist, but also a counsellor. “To start with, it was terrible to hear all of these stories, but bit by bit I learned how to listen. Now, I even suggest that they tell their story one last time – before leaving it behind them forever once the tattoo is finished,” she says.

In the future, Evguenia is hoping to set out on her motorbike with her partner on a tour of Russia, so that she can offer her services to abused women from other regions. Victims already come from all over the region to meet me . . . but I would like to do even more,” she explained.

Evguenia’s commitment is even more symbolic in a Russia which has recently introduced a law decriminalising domestic violence. Since February 2017, some domestic violence cases, such as those where blows are cast for the first time and do not affect the health of the victim, are considered an “administrative” misdemeanour rather than a criminal offence. These cases are penalised with a fine between 5,000 to 30,000 roubles (€75-€452).

The Bill provoked strong reactions among the public, some fearing it might trivialise the phenomenon. According to the Russian ministry of internal affairs, every year 36,000 women are victims of domestic abuse and 12,000 women die as a result of violence from their partners.

In Russia, 97 per cent of domestic violence cases are not taken as far as court.