The Question: Where is the nostalgia for the VCR (RIP)? 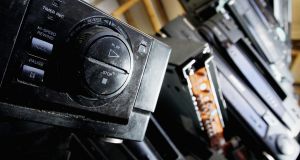 Goodbye VCRs: They were a bit of a chore, really – the tape would wear out, or the VCRs would lose the tracking and they had to be rewound before returning to the store. Photograph: Ian Waldie/Getty Images

When video stores started going out of fashion and then going out of business over the past decade, there was quite a degree of nostalgic loss – we might have moved to Netflix at this stage, but it was the packed aisles of the video store where we spent so much time choosing what to watch, and shaping our cultural life in the process.

But when the final company still producing VCRs, Japan’s Funai Electronics, announced it was going to cease production this week, having only sold 750,000 machines last year, there was barely a peep. People would have been more upset to discover the last Wurlitzer had rolled off the factory floor.

Certainly, compared to the outpouring of affection and nostalgia every time the Walkman flirted with death, the end of the VCR is notably low-key.

Our relationship with music tapes and Walkmans, however, was so much more intimate – they were the most personal devices we had before mobile phones arrived, and they offered a soundtrack to our lives, a form of private escapism turned public.

We might have been vaguely fond of the cassettes themselves, perhaps, those black plastic rectangular boxes with clear panels hinting at the magic inside, and with their clicky cases lined up like books on our shelves.

But they were a bit of a chore, really – the tape would wear out, or the VCRs would lose the tracking, and they had to be rewound before returning to the store. So nobody was sad to see them replaced by DVDs 20 odd years ago – the cases didn’t line up as aesthetically on our shelves, perhaps, but in every other respect DVDs were far superior.

Amazingly, Funai’s decision to cease production comes less than a year after Sony announced the demise of Betamax, the rival format that VHS defeated way back in the 1980s. So there will be no vinyl-style return to fashion for the outdated format, but while we may not be sad at its passing, we should at least thank it for the good times.

1 Transgender Cork farmer (65) surprised at positive response to telling her story
2 Bobby Storey: The IRA's planner and enforcer who stayed in the shadows
3 Q&A: How close are we to having a Covid-19 vaccine?
4 Cork residents begin legal action against landlord over ‘lockdown parties’
5 Unflappable ‘Dr Tony’ became public face of Covid-19 crisis response
Real news has value SUBSCRIBE