The Question: Did JobBridge do its job?

Leo Varadkar has closed the national internship scheme, which generated significant controversy over its five years 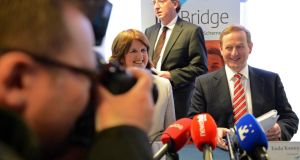 A bridge too far?: The Taoiseach, Enda Kenny, and the Minister for Social Protection, Joan Burton, at the launch of an independent evaluation of JobBridge. Photograph: Eric Luke

As controversial crisis-era government programmes go, few were as reviled as JobBridge, which closed to new entrants yesterday. The national internship scheme, introduced by Joan Burton in 2011, was designed to help jobseekers get job experience with internships, in the process earning an extra €52.50 a week on top of their social welfare entitlement.

While it was a laudable idea, a predictable number of employers were all too keen to take advantage of the subsidised labour it offered. Minister for Social Protection Leo Varadkar commissioned an independent review of the scheme, which recommended it be shut down. Varadkar acknowledged it was “far from perfect”, but nevertheless claimed it had achieved its goals.

The reports of exploitation were abundant, with the Department of Social Protection investigating 200 companies for abuse of the scheme, and it wasn’t confined to the private sector. (Last year, the Department of Justice even used JobBridge to hire lawyers.)

Of the approximately 38,000 people who took part, 70 per cent felt they got quality work experience. However, only about half felt it helped them get a job, enhanced career goals or even kept them in the jobs market. It was a bridge to nowhere, for too many people.

Ultimately, at a time of economic crisis, JobBridge further lowered the perceived value of work. For the interns, too many of the positions felt exploitative, stripping them of dignity. To be unemployed in a recession is one thing, to be taken advantage of is another.

And for many employers, it lowered the floor in terms of wages. Once a job can be done for a pittance, it is very hard to shake the perception that a pittance is how much it’s worth. That erosion of the perceived value of work can be hard to unwind, even in a growing economy, and may end up being JobBridge’s most regrettable legacy.