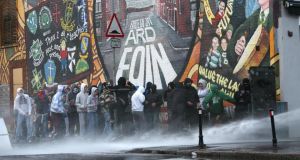 ‘I don’t want republicans to tolerate me – I want their respect.” So says Gerald, community worker and Orangeman, as we sit, on a balmy evening, at the self-styled Camp Twaddell opposite Ardoyne where a stand-off between loyalist marchers and republican residents nears its first anniversary.

Beside us, in the flag-bedecked camp, is a caravan which has been stationed here since last summer when the return leg of the Twelfth march was banned, and a group of volunteers have kept vigil at the scene since last July. The atmosphere is calm, people are open and friendly and there is a constant flow of tea for visitors.

With the impending anniversary – and a policing bill approaching £10 million – the protesters take stock of the year with its failed initiatives.

The situation is locked with both sides asking rhetorical questions. Why will they not allow us five minutes peace to walk past on the way home, ask protesters. Why do they insist on walking through an area where they are not wanted, demand the residents.

The result is stalemate.

Gerald, like virtually all in the Orange Order, finds fault with the Parades Commission which is responsible for adjudicating on contentious demonstrations.

“The last Commission [which ruled against a march at this sectarian interface] was arrogant and ignorant towards the Protestant community, but the current one is just plain weak.”

He believes it is yielding to well-orchestrated pressure from Sinn Féin in particular and the residents groups he accuses of establishing a “culture-war” against loyalists.

Orangemen do not want to walk through Ardoyne, he insists. “The parade doesn’t go through Ardoyne at all, it passes up the Crumlin Road which is a main arterial route. There is no other way, this is the only route to return home.”

“The threat of violence from republican extremists” against what he calls “the expression of our religious freedom and cultural values” is the sustaining force behind the stand-off.

The protest has two objectives, he adds. The first is to replace the Parades Commission, the second is to allow “the brethren and the bandsmen to return home” along the contested route to their lodge in Ligoniel. The return of the lodge banner, held by the lead marchers, to the Orange hall has huge symbolic importance.

And therein lies the problem.

Camp Twaddell has set its face to mounting a 24/7 civil rights-style protest pending permission for Orangemen to pass the Ardoyne flashpoint. They have to maintain their stance. The residents, meanwhile, have to do precisely nothing. There will be no parade without consent and the consequent removal, as the police see it, of any threat of unrest. The odds seem stacked against the loyalists and some Orange sources are privately hoping Twaddell will not become a Belfast version of Drumcree near Portadown, Co Armagh, where a similar standoff has lingered since 1998.

But the only thing that matches his sense of quiet determination is the unspoken sense of hopelessness.

Loyalists believe Sinn Féin, in the wake of its decision to back the PSNI, is wary of being outflanked on the marching issue by dissident republicans anxious to portray them as having sold out.

“They are now trying to be ‘greener’ than the dissidents are. The dissidents are now saying ‘we are the protectors, we are going to give you a united Ireland. These people [Sinn Féin] are traitors, they are serving in government, they have surrendered. Sinn Féin are accusing dissidents of bombing and shooting. Unfortunately we are caught in the middle here.”

In the meantime, loyalists see themselves as powerless; already banned from flying the Union flag every day at Belfast City Hall and Stormont, they are on the receiving end of sectarian attacks, and misunderstood, misrepresented and ignored by the British government which is “appeasing” republicans with “secret deals”.

“We’ve done everything the Parades Commission has asked, we’ve gone into dialogue and tried to address all the concerns that our Catholic neighbours have. We’ve taken away marchers with drink, we work with the PSNI fully, and anybody engaging in triumphalism, as has happened in the past, we’ve rooted that out. We have taken down paramilitary emblems, we’ve taken away certain bands. [The Twelfth] is sacrosanct, it’s our culture. It’s one day a year and the parade takes five minutes to pass, five minutes of respect. I hear the word ‘tolerance’. I don’t want anyone to tolerate me, I want people to respect me like I respect my Catholic neighbours.”