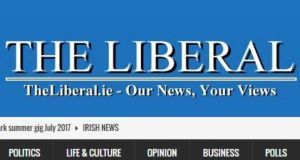 Website theliberal.ie was offline from Monday until Wednesday afternoon.

A controversial website which is facing a number of legal actions over alleged plagiarism is back online after it was temporarily disabled on Monday.

The owner of theliberal.ie, Leo Sherlock, said then that the website would be out of action for a few hours for an update, but it remained offline until Wednesday afternoon. The content has not been updated since.

On Wednesday, it emerged that Independent Newspapers (Ireland) Ltd, publishers of the Irish Independent and independent.ie, had taken District Court proceedings against the website over alleged copyright infringement.

The website is also being sued by the court news agency CCC Nuacht over the unauthorised use of its copyrighted material.

The CCC Nuacht proceedings are being brought in Ardee District Court, which is the nearest court to Mr Sherlock’s home in Co Louth.

CCC Nuacht has brought a case against Mr Sherlock arising out of the publication on theliberal.ie of four articles between June 2015 and July 2016, which it alleges constitutes a breach of copyright.

In addition, Mr Sherlock is being sued in the High Court for defamation after wrongly identifying a man as former IRA member Kevin McGuigan, in an article about the murder of McGuigan in 2015.

The website used a photograph of the wrong Kevin McGuigan in the article, who was a totally unconnected party.

An apology was later posted on theliberal.ie and the article was withdrawn.