The fight to save Bewleys: FitzGerald versus Bruton 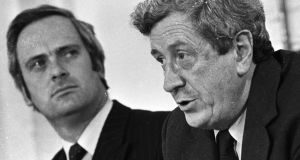 Garret FitzGerald’s unilateral intervention as taoiseach in 1986 to save the Bewley’s chain of cafes in Dublin led to a major row with his minister for finance John Bruton.

When it seemed the family-controlled group which ran the famous cafes in Dublin city centre was on the verge of collapse, the Fine Gael leader stepped in to announce the possibility of a state agency taking over operations.

In a government statement, FitzGerald said he would be interested in seeing if “Bewleys can be maintained as part of essential character and atmosphere of Dublin”.

Bewley’s, which was founded and still run by a prominent Dublin Quaker family, was then 146 years in existence.

FitzGerald asked the catering training agency CERT, and the then state-owned Great Southern Hotel Group to look into the possibility of rescuing the indebted company.

But the initiative quickly ran foul of then minister for finance John Bruton who had been left in the dark about the development.

In a series of letters to the taoiseach written in May and June that year, he complained that he had not been informed. Bruton was also worried about the amount of money that might be involved, expressed concern about the impact a state bailout for one company would have for competitors in the catering sector, and argued that other forms of rescue for Bewley’s had not been exhausted.

“Neither I nor my department was informed of the background,” he wrote on May 30th. “My department was put in a position of trying to establish what was involved, its feasibility and acceptability after the press has reported, to quote The Irish Times headline, ‘Government steps in to save Bewleys’.

“I am, of course, at all times ready to discuss possible future issues. But I should not be asked to agree to proposals on such matters before I have had the opportunity properly to consider them.”

In the succeeding weeks, it emerged that Bewley’s might have debts of up to £4 million including £1 million owed to the Revenue Commissioners. It also became known that at the time of the intervention, another bakery and cafe group, Kylemore, had been in discussions with Bewley’s with a view to buying the company.

In mid-June June, Bruton wrote to the taoiseach to say he had met Brian Hogan of Kylemore. He told the minister that government help for Bewley’s would constitute unfair competition for Kylemore and others in the confectionary business. Bruton said he could not disagree.

“[Mr Hogan mentioned] that Kylemore had been close to buying out Bewley’s when the possibility of government assistance became known publicly.

“You will appreciate that I would find it difficult to go along with committing tax-payers’ money to Bewley’s in any circumstances but particularly so in circumstances where all possibilities of a private sector initiative had not been exhausted.”

He added that, even at a cost of £1 million, a government rescue of the company would be very difficult to defend. Officials made clear the neither CERT nor Great Southern Hotels were interested in taking over Bewley’s.

“This is a very significant amount of money to consider committed out of public funds to save a private company no matter how historic or praiseworthy the operation might be,” wrote minister for labour Ruairí Quinn, who had responsibility for CERT.

In correspondence, FitzGerald suggested the government should not be a majority shareholder as it would increase the expectations of further financial injections. He said CERT and Great Southern Hotels could second people with management expertise on a fee basis to help Bewley’s recover.

Following the discovery that not all commercial options had been exhausted, officials from the taoiseach’s department wrote to dozens of catering and hotel companies to inform them that the taoiseach’s intervention did not preclude any private business from making an offer to take over the stricken company.

In the event, Campbell Catering took over Bewley’s at the end of 1986. Its chief executive Patrick Campbell wrote to FitzGerald thanking him for the “very positive and effective interest you took in the solution to the problems”.