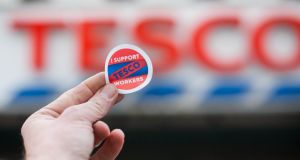 A strike at the Tesco Store in Phibsboro, Dublin. Photograph: Gareth Chaney/Collins

The terms of employee contracts at Tesco have come under criticism from former British trade union leader Arthur Scargill, who joined workers on the picket line on Saturday.

Mr Scargill appeared at two of the 23 stores Irish stores where striking workers are in dispute over changes to contracts.

The supermarket giant, he claimed, are applying terms and conditions from the “17th century” to employees’ contracts.

The company rejected his claims as untrue, misleading and unfair and said it abided by all industrial relations processes at all times.

Mandate argues that contracts proposed for such staff would see some workers experiencing reductions of up to 15 per cent in their incomes, along with requirements for increased “flexibility” in their work conditions.

Tesco said changes to the contracts were needed as the original terms and conditions for these workers were agreed more than 21 years ago, before late-night and online shopping and Sunday openings.

It said the planned moves would affect fewer than 280 employees out of a total Irish workforce of 14,500 and that negotiations on compensation for the affected workers had been under way for 12 months.

A Labour Court recommendation on changes to terms and conditions for staff who were hired prior to 1996 has been supported by Tesco.

In Ireland as a guest of Unite trade union to speak about why he believed Ireland should leave the European Union in the wake of the UK’s vote to exit, Mr Scargill visited Tesco stores in Stoneybatter and Artane in Dublin to show his support for striking workers, members of the union Mandate.

The former national president of the National Union of Mine Workers, who was cheered by workers and greeted by a number of shoppers as he talked to striking employees, said he wanted to show support for picketing workers and act on Tesco’s motto that “every little helps”.

The company has described the strike as unjustified and said all its stores would be open over the weekend. Corporate affairs director Christine Heffernan said more colleagues had arrived in the stores on strike and there had been a good response from customers.

Mr Scargill said “there is no room in the 21st century for zero hour contracts and for terms and conditions that quite frankly belong to the 15th, 16th and 17th centuries”.

He said: “If Tesco have any sense they will not only acknowledge trade unions but concede on proper terms and conditions for their workers.”

Describing his comments as untrue, misleading and unfair, Ms Heffernan said Tesco is “the only food retailer to actually recognise trade unions in all our stores”.

She said Tesco does not engage in zero hour contracts. She said employees had guarantee 20, 25 or 30 minimum hours a week. The days are not fixed but rosters are known a few weeks in advance, she said.

A firebrand trade union leader of the 1970s and 1980s, Mr Scargill was a key organiser of British miners in strikes in 1972 and 1974. He led the 1984-1985 strike of British miners, which was defeated in a confrontation with the government of then prime minister Margaret Thatcher.

When it was put to him that the company had accepted a recommendation by the then Labour Court, while the trade union had not, Mr Scargill said that “the trouble with courts is that they nearly always get it wrong”.

The company said it had always been open to constructive dialogue with the union to reach a “reasonable and fair resolution”.

The dispute centres on what the union claims are moves by Tesco management to worsen the terms of employment for staff recruited before 1996.

1 Midlands lockdown could extend to other areas, warns Covid-19 team
2 Midlands lockdown: Movement restrictions in place for residents of Kildare, Laois and Offaly
3 Sand-hued cyclepaths changing the face of south Dublin coast
4 Meat plant clusters may be down to softly-softly approach
5 Masks Q&A: Who has to wear them in shops and what happens if you don’t?
Real news has value SUBSCRIBE