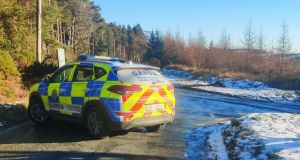 A network of checkpoints has been put in place and people were being turned away from the uplands last weekend.

Ten people have been fined after gardaí patrolling in the Wicklow mountains found them outside their 5km limit.

This is the second weekend in which gardai have identified large number numbers of people visiting the mountains in spite of the Covid-19 restrictions.

Gardaí said they have to date issued 29 on the spot fines, or fixed payment notices (FPNs), to people found to be more than 5km from home without a reasonable excuse, between Monday, when the new €100 fines came into force, and Wednesday.

On Thursday, three people who claimed they travelled around 80km from their homes in Co Meath “to collect burgers from a takeaway” were fined by gardaí for breaching Covid-19 restrictions.

Last weekend, people were being turned away from the Wicklow uplands, while several towing trucks were deployed to take vehicles away on Sunday.

Some tow trucks were removing two vehicles at a time; one on the back of the truck and another towed behind.

One Garda source familiar with the operation told The Irish Times that gardaí would have towed more vehicles away but the way cars had been parked blocked access.

“Some of the gardaí involved in this operation have been based in this region for years and they said they had never seen anything like the volume of people up there yesterday; that the numbers wouldn’t even allow for social distancing despite the vastness of the area.”

“You are talking about thousands of people going there, so compliance (with Covid-19 restrictions) wasn’t great. But the operation we have seems to have deterred more people today.”