Temperatures set to plunge to -4 degrees over weekend 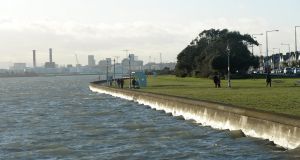 Highest temperatures of 4 to 7 degrees are expected on Friday. Photograph: Dara Mac Donaill

There are four yellow weather warnings in place, as temperatures are set to reach minus 4 degrees over the weekend, Met Éireann has said.

Thursday will be windy, with outbreaks of rain in the morning which will be heavy at times.

The warnings will end at different times in the day but all will be concluded by 8pm.

The strong winds will bring a risk of coastal flooding in southern counties during high tides.

The warnings say southerly winds veering southeasterly will reach mean speeds of 50km/h to 65km/h, with gusts up to 110km/h.

Bright spells and scattered showers will follow from Thursday afternoon with top temperatures of between 8 and 11 degrees.

It will get cold overnight, with temperatures reaching lows of between -1 and -4 degrees, with frost expected in the west coast.

The low temperatures will result in widespread sharp to severe frost across the country.

The frost will gradually clear on Saturday morning to leave a mostly dry day with spells of sunshine.