Teenage swimmer airlifted to hospital after jumping off bridge 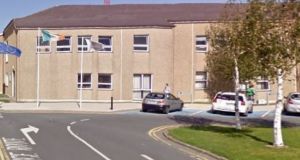 The teenage swimmer has been been airlifted to Waterford University Hospital (above) after she was injured jumping off a bridge. Image: Google Streetview

A teenage swimmer has been airlifted to hospital after she was injured jumping off a bridge.

Emergency services responded at about 5pm on Wednesday when a member of the public called for assistance in Enniscorthy, Co Wexford.

Two teenagers had been jumping off a bridge into the River Slaney during the hot weather when one of them got into difficulties. Her condition is not known but was not thought to have been life threatening.

The injured swimmer was brought to Waterford Hospital for treatment.

Dublin Fire Brigade and Irish Water Safety had earlier warned people against performing “unsafe” water stuns during this week’s sunny spell. They were commenting as video footage from Dublin city centre showed some young people using the good weather on Tuesday afternoon to jump off bridges into the River Liffey.

The footage showed several people jumping off the Samuel Beckett Bridge into the Liffey.

John Leech, chief executive of Irish Water Safety, said people needed to take precautions around the water, and should not take risks just because of the good weather.