Teen with Down syndrome found alone near M50 after swim trip 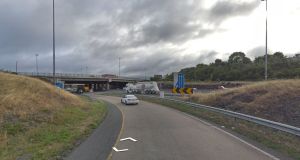 A teenager with Down syndrome was found walking along a grass verge on the N4, close to the M50 motorway, approximate location above. File photograph: Google Street View

A 19-year-old teenager with Down syndrome was found unaccompanied on a grass verge near the M50 motorway after he was left behind following a swimming pool trip with voluntary organisation Stewarts Care.

An investigation has been launched by the organisation, which provides services for individuals with intellectual disabilities, to find out how the incident was allowed to occur.

Staff had taken a group on a trip to a swimming pool run by the organisation in Palmerstown, southwest Dublin. The absence of the young man was only discovered when the group returned to a Stewarts’ day centre after the outing.

The teenager was later found walking along a grass verge on the N4, close to the M50 motorway.

In a statement to The Irish Times, Stewarts Care said the incident was both “distressing and unacceptable”.

Two staff members have been suspended from duty pending an independent investigation, according to sources familiar with the matter.

“Clearly Stewarts on this occasion did not meet the standards of care that would be appropriate in that context and that we expect of ourselves,” the organisation said.

The incident occurred in early April, and an independent inquiry was “initiated immediately” when senior management became aware of the incident, the organisation said.

A barrister has been brought in to conduct the investigation, and a report is expected within a number of weeks.

“Stewarts has apologised unreservedly to the young man and his family, including his mother, through a number of channels – direct and indirect – but recognises that it has not yet provided a satisfactory explanation for the events that occurred,” the statement said.

The mother of the young man has made a formal complaint, and Stewarts has informed both the disability services and safeguarding office of the Health Service Executive (HSE) of the incident.

Stewarts is one of the largest voluntary service providers for individuals with intellectual disabilities, and runs residential homes, day centres and a sports facility.