Nothing to suggest malicious intent, but statements and CCTV will be looked at

Eyewitness footage shows a fire ripping through the top five floors of the Metro Hotel in Ballymun, Dublin. The hotel, and apartments located in the upper floors, were all safely evacuated. Video: Alan Betson 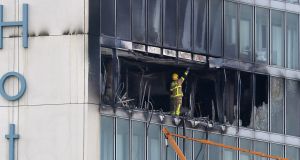 A firefighter surveys the damage at the scene of the at the Metro Hotel, Ballymun after Wednesday night’s fire. Photograph: Colin Keegan/Collins Dublin

A Garda investigation into the Metro Hotel fire in Ballymun, north Dublin, will continue on Friday and focus on a technical examination of the building.

Local forensic teams and possibly the Garda Technical Bureau, generally reserved for major incidents, will attempt to establish the exact cause of the blaze with the assistance of Dublin Fire Brigade officers.

The Garda focus on Thursday was on compiling a list of people staying in the hotel and private apartments on Wednesday night.

While there was nothing to suggest any malicious intent, gardaí will approach their investigation along standard lines which include taking statements and examining CCTV.

The fire began in an apartment on the 13th floor before spreading in a downward direction to engulf more units on the 10th floor.

A number of apartments on both floors were destroyed, according to the fire brigade, while those in between suffered varying degrees of smoke and water damage.

In a statement, management at the hotel said because the cause of the fire remains under investigation, no decision can be made about when it will re-open.

Speaking at the scene yesterday, Dublin chief fire officer Pat Fleming said there was “no indication at the moment” that the cause of the fire was suspicious.

“An Garda Síochána have the lead [in] inspecting this. We will be looking at it . . . from a fire safety point of view and fire spread, and then we will be talking to the building owners and their consultants in relation to the building design and so forth,” he said.

Mr Fleming ruled out any comparison with the Grenfell Tower tragedy which killed 71 people in London last year, saying the spread of that fire through external cladding was not the case in Ballymun.

“One of the messages I would like to get through to people today who may be afraid by having seen a fire like this and they are living in apartments or [are] tenants or own apartments, that this was not a Grenfell Tower type of incident. And the second thing is, it is very, very important if you are living in an apartment to be fire safety aware.”

Fire fighters were alerted to the blaze at 8.13pm with more than 60 personnel arriving in eight units within about seven minutes. Staff said evacuation procedures had been helped considerably by the fact the majority of hotel guests were in either the restaurant or bar at the time.

About 150 people were thought to have been evacuated on Wednesday night. People living in the building may not be able to return home for months.

“I think we are talking much longer than [a period of weeks],” Mr Fleming said, citing the need for extensive repairs of fire and water damage and for structural inspections.”

Asked about whether there was an issue with the height of ladders, Mr Fleming said: “No because in buildings like this, what are known as ‘dry risers’ so we fight the fire internally as well as externally.

“There is always a problem fighting a fire like this in a high-rise building externally because the wind has a huge impact both on the fire itself but also on our ability to get water on it, but it wasn’t an issue for us in this fire.”