Auditor apologies after row over invitation to former UKIP leader 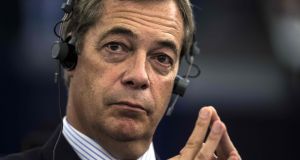 Mr Farage was due to speak at the Hist, as it is known, early next year and would have received the society’s gold medal for outstanding contribution to public discourse.

The offer of the gold medal has now been withdrawn with an apology from the society’s auditor Paul Molloy who said it was his decision alone to award him the medal.

Mr Farage had been invited because of his role as one of the foremost advocates for Brexit.

Mr Molloy explained that the gold medal was awarded to those “who have made their mark in many different fields as well as in the public sphere, and to individuals who often hold divergent views”.

It did not necessarily mean the society held the same views as the person receiving the medal.

Mr Molloy said the decision to award the medal had now been withdrawn following a meeting of the society’s committee and he endorsed that decision.

He said many students had made their views known to him about the invitation after it was announced in Trinity News.

However, he said Mr Farage may still be invited to speak at the Historical Society.

Mr Molloy explained: “While it is vital the society remains a platform of free enquiry and debate, it is clear in retrospect both to myself and the general committee that the conferral of the medal would be received by many as an endorsement of the views which Nigel Farage holds.

“It was never my intention in extending this invitation for that to be the case, and it should not be taken as a reflection of the views of the general committee or as an endorsement of them by the college historical society.

“It was wrong for me to extend an invitation to Nigel Farage in the manner which I did. I offer my sincerest apologies for any offence which has been caused from doing so.”